What can you do when the pup of programming becomes the black dog of burnout? Dude, leave

Hey, friend. It's not your fault 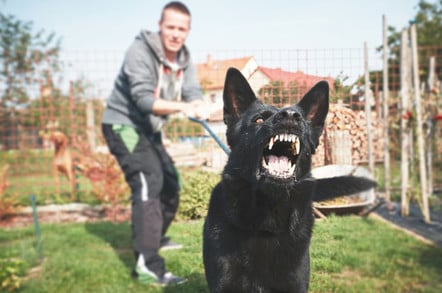 The DevOps community is focused on this thing called "culture". By this, I always take them to mean the processes, norms, and HR policy that an organization has in place.

You want the culture to be open, understanding, curious, and above all else, well, friendly. If you're using failing-as-learning to improve your software capabilities, you can’t have a failing-as-failing mindset and incentive system.

The opposite of DevOps culture

Around 2015, John Willis introduced a foil to positive culture, a black dog of destructive funk he called burnout. Whether an individual is working in a negative, blame-storming organization, or even a happy, blameless one, sometimes people end up taking on too much, damaging themselves.

I must admit that I've paid little attention to this part of DevOps lore. That's an embarrassing admission since John is a long-time good friend (we used to wax on and on about ITIL back when it was cool). But if you're in the industry long enough, John's mixing in of burnout think into IT starts to make a lot of sense, and, indeed, is helpful.

Eventually we all start giving that black dog too many table scraps.

All heroes are tragic

Working in IT is a magical, mysterious, and wonderful task. To the normals, it seems like the computers are demons machinating against them, but us nerds know they're just like big puppies pouncing and growling to get us to roll around on the floor. We bond with them, and we start to dedicate ourselves to the machines.

In a business context, when you're paid to roll around on the ground, things start to change. What were once fun, even relaxing, all-night sessions debugging code starts happening more and more. Your boss starts yelling at you, even if quietly, telling you that you should just cancel all your weekend plans for the next month. Somehow, you still see yourself as a hero, the one who can put in all that effort to troubleshoot and emerge early Monday morning with a fix (always some freaky DNS problem, of course).

Those nervous managers who were looking over your shoulder, calling in from their daughter's birthday party to check on your progress, suddenly proclaim you some sort of Achilles, grand champion of the battle over beauty, respected by all.

Of course, what you forget is that heroes rarely die intact and without holes in their heels.

In a dysfunctional culture that doesn't prioritize long-term working software, and instead looks for the quick fix, you enter a cycle of strife, toil, and triumph over and over.

As the hero of all disasters, you become the central focus of fixing everything, and any slacking on your part is reflected back to you as a flaw. If you can't fix the crashed storage array this time, then clearly you're all used up like a failed prize-fighter with a steak to the face, or, worse, a thoroughbred whose name is now glue.

Us nerds see failure as a problem with us, not with the overall system that consistently failed to apply the right patches, decided to spend too little on high availability, and refused to halt releasing features to make time for hardening production. It's not the culture's fault, it's our fault. That begins the spiral into burnout. The ups and downs of green and red status icons starts choking you like an anaconda, pulling tighter every time you breath.

You're sliding into a hole of the culture's and your own making. The research shows that the first mental downgrade is to become cynical – "disassociated" from yourself and your environment – to protect yourself. "It's not my fault," you think, "everything is FUBARed and SNAFUed." Wearing a Deadpool T-shirt with disaffecting flip-flops to work each day, though, is thin armor. The stress keeps piling on, unfazed by your sartorial carapace. Soon you're entirely burned out, constantly thinking that it's not the storage array at fault, but you.

John's insight at this point was to pull in the rich body of knowledge on burnout. As ever, we in the IT industry act like we're a breed apart: nothing any other industry has learned applies to us. It's a miracle that we discovered and accepted Lean into our world.

There's decades of research on burnout in various trades, from healthcare, to the service industry, and even to IT. One 2015 study by Sara Cook (PDF) nicely compiles all this research as a prefix to its own study of burnout among IT workers. While there were many factors that drive stress, the study concludes that organizational politics and "menial work" were large drivers of burnout.

In other words, dealing with managerial bullshit and toil drives a great deal of stress.

Reducing managerial politics is difficult, but that's why DevOps is so focused on putting a positive culture in place. Part of the problem with changing management is that the people who work for them can't change them. They have to change themselves. Of course, their managers could change them, but then it's managers who need to be changed all the way up.

Reducing toil, of course, is one of great principals of SRE. If an engineer spends most of time on menial work, something is going terribly wrong and work stops to address that error. Of course, most organizations are not so focused on reducing toil. In Cook's study just about 75 per cent of respondents said they spend too much time on "menial tasks".

One of the easiest ways to address stress, Cook suggests, is to better prioritize work and hold off interruptions. While this isn't always possible, it does add color to the anecdotes about how much happier and productive backlog-driven agile teams are. Clearly, management can decide to introduce such structure, and even teams can to an extent.

In my career, I've found that you can't always work in an enlightened organization that self-heals once some organization science study comes out. I mean, have you ever tried to actually download academic PDFs, let alone read them?

When I've been trapped with the black dog late into too many nights, with no managers there to throw a muzzle on it, the only solution I've found is to leave, to find a new job. It can seem impossible, but it always works and leaving is often easier than it seems. It's certainly better than becoming a burnt-out cinder. While IT might be a stressful line of work, at least there's always the call for more workers and there's a good chance that a new organization will treat you more like a human, and less like a dog. ®