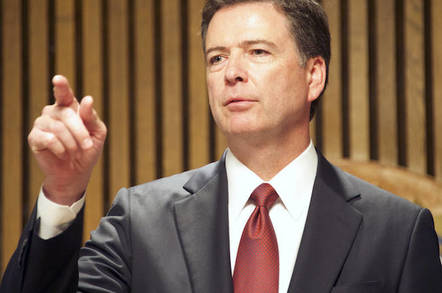 Former FBI director James Comey was using Gmail for FBI business while overseeing the controversial probe into Hillary Clinton's use of a private email server during her tenure as US Secretary of State.

A report from the US Department of Justice found Comey was "insubordinate" in his handling of the investigation while absolving him of political bias over the FBI's decision to clear Clinton of any criminal wrongdoing before reopening the investigation in the heat of the presidential election battle.

The 568-page report (PDF) from the DoJ's Office of the Inspector General (OIG) uncovered "numerous instances in which Comey used a personal email account to conduct unclassified FBI business". Comey was apparently in the habit of transferring draft messages between FBI email accounts to his personal (Gmail) account.

In November 2016, Comey forwarded a proposed post-election message for all FBI employees entitled "Midyear thoughts" from his unclassified FBI account to his personal email account. This document summarised Comey's reasoning for notifying Congress about the reactivation of the Midyear investigation into Clinton.

In March 2017, Comey sent from his personal email account to his and another senior Fed's unclassified FBI accounts multiple drafts of Comey's proposed opening statement for his 20 March testimony to the House Intelligence Committee.

OIG investigators questioned Comey on his use of a private email account, which he justified by stating that it was "incidental", only involved unclassified material and didn't violate record-keeping rules because a government account was always in the chain. He claimed his practices partly stemmed from not having a secure data connection to his home while FBI Director, a shortcoming that no one (incredibly) thought to address.

According to the report (page 425), Comey told OIG investigators: "I did not have an unclass[ified] FBI connection at home that worked. And I didn't bother to fix it, whole 'nother story, but I would either use my BlackBerry, must have been or Samsung... my phone, I had two phones — a personal phone and a government phone. Or if I needed to write something longer, I would type it on my personal laptop and then send it to Rybicki [James, chief of staff], usually I copied my own address... Yeah. And so I would use, for unclassified work, I would use my personal laptop for word processing and then send it into the FBI."

The response raises a number of issues, not least of which is the FBI's lack of data loss prevention – industry-standard tech to prevent deliberate theft or the inadvertent leaking of sensitive information. Either the Feds don't use it or it's easy to circumvent by simply copy-pasting things into private email, which kind of defeats the point.

The report also faulted Comey for being "insubordinate by intentionally concealing from DoJ his intentions regarding the July 5, 2016, [press] announcement and instructing his subordinates to do the same". This related to the July decision to close the Clinton email investigation before reopening it in October 2016.

The reopening was triggered by emails uncovered in a separate "sexting" investigation into disgraced former Congressman Anthony Weiner. Weiner's estranged wife, Huma Abedin, was vice chair of Hillary Clinton's 2016 presidential campaign and was not a suspect in the sexting case.

Nonetheless the decision was made to review Abedin's emails contained on Weiner's seized laptop in case they uncovered new evidence about the Clinton email server, such as emails deleted and unrecovered from the server itself.

Nothing substantive came of that, except reopening the Clinton email server controversy days before a US presidential election, and the matter was dropped.

Comey, whose reputation and legacy has not exactly been enhanced by the OIG report, reacted diplomatically via Twitter.

"I respect the DOJ IG office, which is why I urged them to do this review. The conclusions are reasonable, even though I disagree with some. People of good faith can see an unprecedented situation differently. I pray no Director faces it again. Thanks to IG's people for hard work."

Senior figures in the Trump administration – including Vice President Mike Pence, the president's daughter, Ivanka Trump, and her husband Jared Kushner – have separately been pegged for using private email for government business. Comey's addition to the roster provoked a phlegmatic response from Hillary Clinton herself. ®