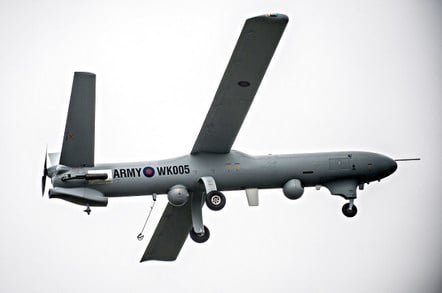 A Watchkeeper drone, similar to the one that crashed in Wales yesterday. File photo, Crown copyright/MoD

A British Army Watchkeeper drone has crashed near Aberporth, taking the number of crashes involving the unmanned aircraft to five.

Local reports indicated that the unmanned surveillance aeroplane, which is controlled remotely from the ground, crashed in a lane near West Wales Airport at 5pm yesterday.

The Cambrian News reported that the crash happened on the same day that the local council was considering whether to approve a "major facelift" at the airport, which is about 144km (90 miles) northwest of Cardiff.

It has been the main base for Watchkeeper drones for a number of years, with 47 Regiment Royal Artillery operating the craft from the airport. The Watchkeeper is a modified Elbit Hermes 450 design and is intended to be used in British service as a battlefield reconnaissance and surveillance craft. The aircraft are built by Thales and maintained by a Thales-Elbit joint venture called U-TacS.

A spokesman for Mid & West Wales Fire and Rescue Service told local papers that one crew used foam to clean up the resulting fuel spill. They added that nobody was hurt in the incident.

A Ministry of Defence spokeswoman declined to comment on what the Watchkeeper was doing when it crashed but did say: "The aircraft has been secured and there is no risk to the public. An investigation is under way."

The crash-dogged Watchkeeper programme is £400m over its original budget of £800m, totalling £1.2bn of public money so far, and has done no operational (warzone) flying other than a token deployment for a few days in Afghanistan in the early part of this decade. The programme began in 2005.

Four Watchkeepers out of the total order of 54 have previously crashed. One of those crashed after its crew disabled anti-crash systems, racing to land safely before an incoming thunderstorm hit. Another crashed thanks to poor software design which caused the drone to fling itself into the ground from a great height after incorrectly deciding it had landed.

Two more Watchkeepers crashed into the Irish Sea last year. The MoD tried to hush those crashes up, saying nothing publicly until the news accidentally leaked at a defence trade show. ®