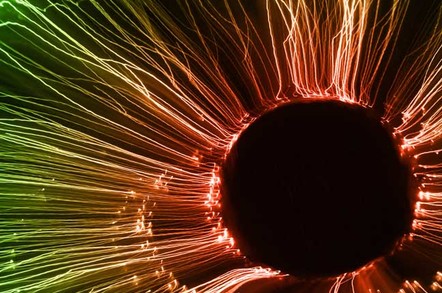 Telefónica and Huawei have carried out a successful field trial of quantum cryptography on commercial optical networks.

Other teams, notably a Toshiba Research and Cambridge University Engineering Department, have made great strides in Quantum Key Distribution (QKD), a technology that promises unprecedented secrecy.

While previous efforts have concentrated on dummy networks and the lab, Telefónica and Huawei's tests were carried out over existing optical networks. Others have focused on getting the performance or speed of quantum cryptography systems up while Telefónica and Huawei grappled with getting the tech to work over existing fibre networks, overcoming problems created by signal degradation and other difficulties.

The field trial employed optical infrastructure provided by Telefónica Spain, connecting three sites within the Madrid metropolitan area where software-controlled CV-QKD devices, developed by the Huawei Research Lab in Munich in collaboration with UPM, are installed, together with SDN-based management modules developed by Telefónica's GCTIO Network Innovation team and the components required to integrate QKD with network functions virtualization (NFV) and SDN technologies developed by UPM.

Current cryptographic techniques for key generation are based on complex mathematical problems and one-way functions, which require heavy computing horsepower to resolve. As computational capacity grows, the time required to solve these problems becomes shorter, reducing the security of the keys and the communications they protect.

This is always going to be a problem with all forms of public key cryptography. An alternative cryptographic technique is based on one-time keypads. The problem of this approach is exchanging a one-time key between two parties without an eavesdropper or hacker getting a hold of it.

QKD promises a key exchange system that is theoretically uncrackable but still subject to potential implementation flaws. Secret keys for one-time keypads are transmitted with one photon encoding one bit.

Any attempt by an eavesdropper to intercept and measure the photons alters their encoding, thanks to fundamental principles of quantum physics. This means that eavesdropping on quantum keys can be detected. Compromised key exchanges can be dropped and the process repeated until a theoretically unbreakable key is exchanged.

QKD not only provides protection against the threat posed by quantum computing to current cryptographic algorithms, but it can also provide a much higher security level for the exchange of data.

QKD that won't break the bank

Professor Alan Woodward, a computer scientist at the University of Surrey in England, commented: "The reason that the Telefónica QKD system is getting attention is that they have developed a way of using existing networks over which they can apply QKD.

"The BT/Toshiba network is effectively a dedicated fibre network with repeaters, all of which are committed to supporting QKD. If the Telefónica system works then it means one of the big stumbling blocks of QKD might be avoided i.e. the significant cost of putting in new fibre networks to support QKD. If you can use existing networks, maybe even interleaved with traditional data traffic, that would really be a step forward. QKD en masse so to speak rather than having to use dedicated networks.

"Of course, even the existing networks would need a bit of retrofitting as you need the QKD equipment on the end points of those networks, but still cheaper than specific fibre networks just for QKD."

Those involved in the trial echo Woodward's point that the field trial takes us one step closer to allowing next-generation encryption to security-conscious businesses without breaking the bank. It'll be less costly, though no one is putting a price tag or timeline on delivery of QKD services just yet.

Vicente Martin, head of the Centre for Computational Simulation at UPM, told The Register: "The ability to use new network technologies like SDN, designed to increase the flexibility of the network, together with new QKD technology is what allows us to really converge quantum and classical networks on the existing optical fibre infrastructure. Now we have, for the first time, the capability to deploy quantum communications in an incremental way, avoiding large upfront costs, and using the same infrastructure."