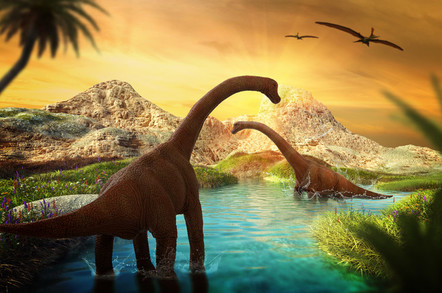 Analysis Across political divides in the United States there's a common appetite for reining in the country's plutocratic corporate overlords. The country that reveres Mom 'n' Pop businesses is wary when giant businesses combine. But the landmark decision in a US District Court permitting two legacy businesses to merge indicates how hard this is.

In one of the most-watched antitrust decisions in decades, a judge booted out the Department of Justice's objection to the merger of AT&T and Time Warner. It was unusual for a few reasons. It's the first time the government had intervened in a "vertical merger" since 1979 on behalf of consumers.

The past 40 years have reflected a wariness of intervening to stop mergers, ever since President Ronald Reagan began to roll back antitrust in the 1980s. The Clinton years (PDF) saw the authorities pursue Microsoft, but this was abandoned soon after George W Bush was elected president in 2000.

This has led to a divergence between European, Asian and US antitrust policies. The US approach maximises consumer welfare, while authorities outside the US look for potential threats to a healthy market, resulting in a more active, interventionist approach.

On the government's side as an expert witness was antitrust economist Professor Carl Shapiro, who contributed the phrases "network effect" and "essential patent" to everyday business language.

The scale of the investigation was fairly epic: the government (or their computers) sifted through 25 million documents, unearthing another 7 million through discovery.

And it was against the clock: the deal has a built-in bomb, designed to blow up by 21 June 2018 if regulators blocked it. (AT&T would then pay Time Warner a $500m break-up fee.)

AT&T and Time Warner announced their decision to merge in 2016, with Time Warner selling off its legacy ISP business to Charter (it's now Spectrum).

Watching vertically integrated, data-informed entities thrive as television subscriptions and advertising revenues declined, AT&T and Time Warner concluded that each had a problem that the other could solve: TW could provide AT&T with the ability to experiment with and develop innovative video content and advertising offerings for AT&T's many video and wireless customers, and AT&T could afford Time Warner access to customer relationships and valuable data about programming.

With the obvious distribution obstacle (cable) out of the way, the DoJ looked set to give it the nod.

Then US President Donald Trump entered the fray. "Deals like this destroy democracy," he had said on the campaign trail. Trump didn't mind Disney buying Fox, but this one involved his least-favourite cable channel: CNN.

Last October, the DoJ sued. The two companies became convinced the president was attempting to block their merger. (They unsuccessfully requested to unearth communications between the White House and the DoJ.)

The District Court decision is a big setback for Delrahim and Trump. So how did the giants win?

The case was a tough one for the government, as it bore the burden of proof. Judge Leon accepted that vertical mergers in theory could cause harm, but didn't see "case specific evidence" from the DoJ that this one would.

Shapiro presented a model predicting how video subscribers would be harmed. To summarise, the court viewed three distinct markets: content production, content aggregation and content distribution. The merged AT&T-Time Warner would have greater power and would so be able to demand higher fees from distributors, the US government argued.

Judge Leon wasn't convinced that Time Warner's Turner (the owner of networks including HBO and CNN) would have greater bargaining power, and therefore increase its fees. He was dismissive of the model that Shapiro advanced, calling it a "Rube-Goldberg contraption" only one incapable of transporting a pea across a room. He found the arguments presented by AT&T's economist, Professor Dennis Carlton, more convincing.

"The record is barren of any contentions by the third-party competitors that they would actually give in to any price increases demanded by Turner... the lack of real-world evidence that Turner would likely be successful in obtaining increased fees from virtually every distributor (as Professor Shapiro's model projects) due to its relationship with AT&T is yet another strike against the Government's increased-leverage theory of competitive harm."

He called the evidence "speculative", "unproven" and even contradictory. He also thought the defendants had done their homework, while the government lawyers hadn't. The defendants presented historical data.

"I couldn't help but notice that the more and more questions were raised during the trial about the reliability of Professor Shapiro's theory and model, the more the government appeared to be minimising the importance of his analysis".

This was largely, as he explains in the introduction to his 172-page judgement, because thanks to cord-cutting, he sees the market as one that's very dynamic. The MVPD (multichannel video programme distributor) market has been lucrative and, historically, largely regional. But in recent years the rise of SVODs (like Netflix and Prime) has been complemented by MVPDs, like Sling, Now TV and YouTube TV. Customers are moving to the latter two in great numbers. This great churn impressed the judge. He noted that in a can't-beat-'em-join-'em strategy, AT&T had also launched its own VMVPD, DirecTV Now.

He was also impressed the upstart virtual MVPDs and the SVODs have decent content. "Netflix alone spends more on content than Time Warner," Judge Leon noted. He added that Facebook and Google gain more from advertising than TV companies do, although only a small proportion of that advertising is video-related.

So the cord-cutters won the day. Many mergers disappoint the couple being merged: here, two legacy businesses are hoping scale will give them an advantage. It isn't blindingly obvious that they're better off together. AT&T has huge investments to make in 5G to be a viable, buffering-free transporter of video content. And Time may be better focusing on what it's good at, producing content – something it realised after its notorious Dotcom collision with AOL.

As for consumers, how does this grab you?

"Imagine AT&T giving free CNN and free HBO to every AT&T wireless subscriber," one media analyst speculated. Well, imagine being a small wireless ISP who has to compete with free HBO, you may wonder.

With tech companies now far greater in market cap terms than legacy media and telecoms businesses, the biggest antitrust scalps lie ahead. What Judge Leon has reminded us is how hard it is to make that case in a US court. If you're going to strike the King, don't miss. ®