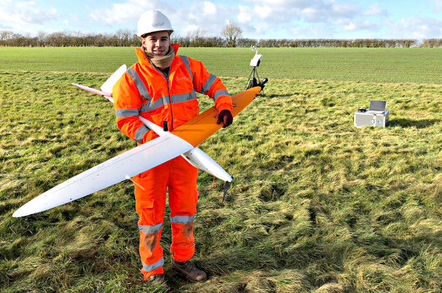 A Brit drone firm has made a 29km beyond visual line-of-sight (BVLOS) flight, a small but important step for fuller commercialisation of the tech.

Operating under a special dispensation from the Civil Aviation Authority, Sensat flew its craft – a conventional layout small unmanned aeroplane – around its 29km course, during which its furthest distance from its operators was 12.2km.

The flight took place "in East Sussex" and at a height of less than 500ft, Sensat's head of product Harry Atkinson told The Register.

The fact that such a long BVLOS flight was authorised by regulators is promising for the industry. BVLOS flying is what will unlock visions of the future promoted by companies such as Amazon, with its famous drone delivery ambitions.

It is also important to highlight that flying at below 500ft kept the Sensat drone well outside the hugely complex airspace restrictions over East Sussex, which includes the approaches to Gatwick Airport.

Sensat is a drone-based aerial mapping and survey firm. Last year the company said it flew around 9,000km while surveying roads and railways.

"BVLOS is often cited as the turning point for our industry, it is the moment from which we can begin to see drones truly making a positive impact on our daily lives," said Sensat chief exec James Dean in a statement.

"At SenSat we are using that advantage to make data freely available, with the ultimate goal of driving better decision making that brings transparency and consistency across publicly funded infrastructure projects."

The firm reckons that, under similar permissions as for this demonstration BVLOS flight, it could survey the entire High Speed Two rail route with just seven flights, contrasting this with what it said would be 470 flights by an operator working within current drone flight restrictions.

A French company made a 50km BVLOS flight last year, though its craft was controlled through the local 3G mobile network and flew along an electricity pylon route – which, by its nature, is off-limits to all other forms of aviation and therefore poses fewer regulatory headaches.

The EU's published drone regulation draft, which appears likely to be adopted as is, would require all commercial drone operators to gain pre-flight authorisation from a regulator and to follow a flight planning process that bears more in common with conventional manned aviation than anything else. ®