Woman sues NASA for ownership of vial of space dust

She claims it was gift from Apollo veteran Neil Armstrong 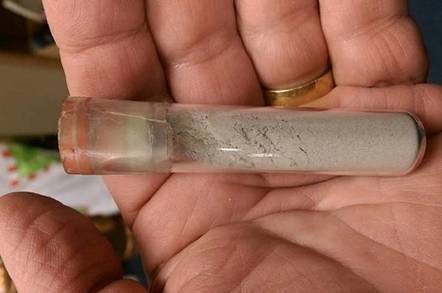 The contested vial of Moon dust

A woman has sued NASA, claiming to be the rightful owner of a small vial of moon dust supposedly given to her by Neil Armstrong.

The lawsuit was filed under the US District Court of Kansas last week by Laura Murray Cicco. She claims that when she was ten, her mother handed her a glass vial with a rubber stopper containing light grey dust along with one of her father’s business cards.

On the back of the card, there is a message that reads: “To Laura Ann Murray – Best of Luck – Neil Armstrong Apollo 11.” Cicco said her mother assured her that the vial was a sample taken from Armstrong - who was the first person to set foot on the Moon - when he ventured onto the satellite during the Apollo 11 mission in 1969. An expert has, apparently, scrutinized the note and believes Armstrong’s signature is real.

Cicco said her father, Tom Murray, was friends with Armstrong and both men had served in the US military. Murray was as a pilot during World War II, where he trained pilots for the Boeing B-17 Flying Fortress, while Armstrong was a naval aviator in the Korean War aboard the aircraft carrier USS Essex before he was an astronaut.

After leaving NASA, Armstrong became a professor at the department of aerospace engineering at the University of Cincinnati, where the Murray family moved to live near in 1970.

A separate document detailing the contents in the vial shows that a chemist from the Bruker Corporation, a lab based in Billerica, Massachusetts, believes that the sample is “consistent with the known composition of lunar regolith,” in an analysis done for the lawsuit.

X-ray fluorescence has also identified that it contains dust from Earth. “I am speculating, but it may be possible that some dust from the earth became mingled with this likely lunar sample,” Tom Tague, a chemist from the Bruker Corporation, wrote to Christopher McHugh, the lawyer representing Cicco.

The US under Barack Obama passed a law in 2012 that gives astronauts full ownership rights to artifacts collected during space missions.

“A United States astronaut who participated in any of the Mercury, Gemini, or Apollo programs through the completion of the Apollo-Soyuz Test Project, who received an artifact during his participation in any such program, shall have full ownership of and clear title to such artifact,” according to law. But it “does not include lunar rocks and other lunar material.”

Space rocks are prized possessions and can be worth close to a million dollars. NASA is keen to keep all samples and have been known to even set up a sting operation to nab them. In 2011, a grandmother in California trying to sell a moon rock encased in a paperweight was set up by a NASA agent pretending to buy it.

After the paperweight was snatched away, the 74-year-old and her husband were grilled in a Denny’s parking lot for two hours, where she wet herself after pleas to use the toilet were ignored.

In April, the US Court of Appeals for the Ninth Circuit in San Francisco ruled that, in this case, the agent can be sued for unreasonably prolonging the pair’s interrogation. ®