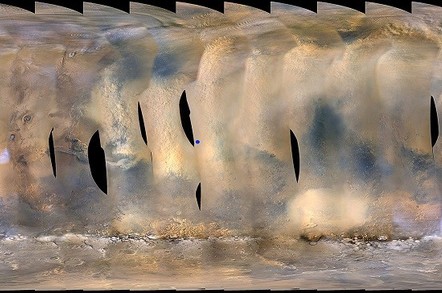 The dust storm as of 6 June 2018. Opportunity is the blue dot. (pic: NASA/JPL-Caltech/MSSS)

As NASA's Opportunity rover nears its 15th birthday, engineers are worried the plucky little robot may not survive a worsening Martian dust storm.

The Mars Reconnaissance Orbiter (MRO) spotted the approaching storm on 1 June, giving the Opportunity team notice to kick off their contingency plans. The storm now covers more than 18 million square kilometres and has since reached the aptly named Perseverance Valley through which the elderly rover has been trundling.

Unlike its plutonium-powered successor, Curiosity, dust is bad news for the solar-powered Opportunity. Too little sunlight, and the robot will be unable to charge its batteries, which in turn means that it will be unable to run its heaters.

The rover can withstand temperatures between -40°C to 40°C (-40°F to 104°F). Should Opportunity spend too much time outside those boundaries, bad things will happen to its electronics and its 15-year mission would likely be at an end.

Engineers received a transmission from the rover yesterday showing the temperature was down to -29°C (-20.2°F).

However, boffins were cheered that Opportunity still had enough power to maintain communications. During a storm in 2007, the rover went silent for several days in order to eke out its power reserves, leaving NASA's Jet Propulsion Laboratory holding its breath until the rover signalled it had survived.

There is some good news, however. Although blocking sunlight, so the rover cannot recharge its batteries, the dust storm also absorbs heat, affording Opportunity some protection from extreme cold.

Scientists reckon it was cold that did it for Opportunity's twin, Spirit. After becoming stuck and unable to orient its solar panels for maximum sunlight, the robot inspired this touching xkcd tribute and sent its last transmission in March 2010.

Opportunity, having endured 50 times its original 90-day mission, has survived both Martian and Earthbound attempts (in the form of NASA budget cuts) to end its mission. Even a failing memory and a puerile sense of humour have not prevented the robot from doing science on the red planet.

A lengthy sojourn in a dust storm could, however, be what finally spells the end for the robot.

The mission team have requested extra coverage from NASA's Deep Space Network in order to maximise opportunities for communication and once again, engineers will be holding their breath until the storm subsides. ®