In defence of online ads: The 'net ain't free and you ain't paying

Selling England by the pound 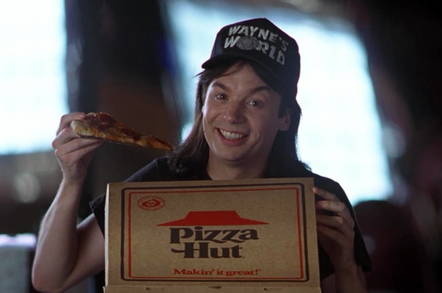 Something for the Weekend, Sir? It's about to get wet. Have some towels ready.

Indeed, I anticipate a good soaking this weekend, both inside and out. This is because Friday 8 June has been announced as World Oceans Day. Come on, you know – that famous international day of celebration when we, er, get the day off work? (no) … hold ocean-themed parties? (no) … dress up like a halibut? (no, well OK, it was just that one time).

Me, I plan to mark the occasion by spraying myself liberally with Lynx "Sea Air" and walking around exuding an aroma akin to that of a bladderwrack-infested crab's armpit in a fishfinger factory.

When I was a nipper, all we had was Christmas, May Day and the Queen's two birthdays. Now, though, every square on the calendar has been designated a Momentous Time Period of Global Importance of one sort or another.

So after worrying about how we're going to deal with all the oceans polluted with plastic, we can promptly forget what we planned to do about it on Saturday 9 June by indulging in World Gin Day. I hereby invite you all on Sunday 10 June to join me in celebrating World Hangover Day.

This is just as well, as Monday next week – according to my calendar, at least – appears to be Get Bored Shitless in Meetings Day, followed by (Everything Goes) Titsup Tuesday and Incompetent Over-Promoted Wanker Tells Me How To Do My Job Wednesday.

It's not a good start to the International Month of the Gonad, I can tell you.

Of course, it's just advertising. French Cheese Day. Sicilian Wine Month. Sponsoring a Brick in the Codebreakers' Wall. Selling England By The Pound. I'm perfectly OK with all that.

People seem to be getting terribly upset at the shocking discovery that Google, Facebook and in fact everyone else online makes money from advertising, either by selling goods, renting services or indeed by carrying the ads themselves.

Personally, I can't see what the problem with being advertised at. Even in a state-run economy, citizens need to know what there is to buy. It harms me not a jot, emotionally or politically, to be told that one fabric detergent might be more effective than another at removing embarrassing stains. Who knows, at some point I might even take up those unsolicited email offers of Diazepam – quite possibly during the 364-day wait until the next World Gin Day.

Don't tell me I'm being fooled into supporting an unsustainable market economy, because I know that already. It's just that the alternative scenario, in which nothing gets produced or supplied until a consumer spontaneously demands it, remains elusive. It's not like cavemen sat around a fire scratching their arses three million years ago wishing they could play Candy Crush. Even if they did, they'd probably want to know which devices and app stores to use. Hmm, I can feel a new series of The Flintstones coming on…

The thing is, one way or another, stuff has to be paid for. Since this generation has decided not to pay for anything, least of all for factual information investigated by salaried journalists, advertising and sponsorship is all we have left.

Mind you, this particular rot began at the end of the last century, if memory serves. Back in 1995, I was running a Compuserve forum for a short-lived but well-received magazine for Ziff-Davis UK called Computer Life and got roped in to helping produce a handful of pages to showcase the title on the new-fangled World Wide Web. A colleague coded the pure HTML (all tables, grey backgrounds, blue underlined links and no CSS) while I wrote the text, prepared the graphics (all of them static or animated GIFs) and added some links to download some wacky Windows 3.0 screensavers.

The two of us quietly congratulated ourselves on creating Britain's first computer magazine website – Futurenet was still all branding and no content at that time – and wondered what potential new readers might think.

What we got was complaints. Where were the rest of the magazine articles? Where was the all the software we promised?

Trying to explain that these could be obtained by buying the magazine in a shop or signing up for a postal subscription – with cover-mounted CD, no less – just seemed to make these people angrier. They were paying their phone company for dial-up internet access, they told us, so as far as they were concerned, everything on the web had been paid for already.

As we explained at the time, in vain as it happens, this is rather like driving to a supermarket and insisting that since you'd already bought the car and filled it with petrol, all your groceries ought to be handed over to you for free.

So the content gets paid for in other ways: your data is trawled, thrashed, hacked into, shared about and sold on. You hate being told about which fabric detergents to buy! You prefer being sent direct messages via social media from political propagandists! That's how the internet is funded these days. That's what you wanted, nay, demanded. It's a world economy that you were instrumental in creating. Why are you getting upset about it now?

Me, I'd rather pay a few quid to get content I can trust. Failing that, I'll put up with the adverts.

Alistair Dabbs is a freelance technology tart, juggling tech journalism, training and digital publishing. He would rather not keep receiving unsolicited emailed invitations from Russian women asking him to fix their Jacuzzis as his skills with a telescoping basin wrench are dubious at best. He admits it may be his own fault for advertising his services on Babesnyet. Boo-boom-tish.