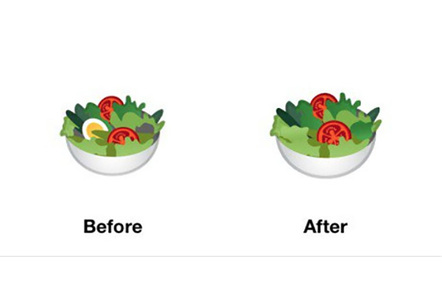 British egg producers have expressed disappointment at the removal of the oval-shaped favourite from Google's salad emoji.

There's big talk about inclusion and diversity at Google so if you need any evidence of Google is making this priority may I direct your attention to the 🥗 emoji— we've removed the egg in Android P beta 2, making this a more inclusive vegan salad. pic.twitter.com/kzHY0A9ZjG

The changes apply to Android P, currently in beta.

Just want to clarify that the goal of salad emoji redesign was to create an image more faithful to unicode's description. "A bowl of healthy salad, containing lettuce, tomato, and other salad items such as cucumber." Bon appetite!

"Are the people at Google cracking up? We completely understand that vegans choose not to eat eggs, but in the UK egg sales are up by almost 5 per cent and many people love them, so it seems a shame for the majority to be missing out due to concern for offending one group," a spokesperson for the British Egg Information Service told us.

She added, reasonably: "Eggs are the perfect salad accompaniment for non-vegans – full of protein, vitamins and minerals, as well as being delicious".

In April Apple removed replaced the universal symbol for gun with a water pistol, and Twitter, Google and Microsoft followed suit.

As our online (and offline) world becomes more complex and grim, emoji designers are creating the kind of beautiful utopia we can only dream about. ®

Pick your poison in IOS and IOS XE: denial-of-service or remote code execution?

Wow, I see what you did there *rolls eyes*