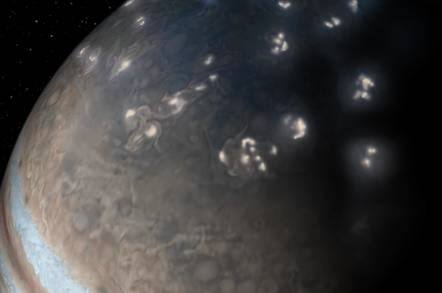 Artist's impression of lightning on the north pole of Jupiter. Image credit: NASA/JPL-Caltech/SwRI/JunoCam

Data from the Juno spacecraft currently orbiting Jupiter has shown the highly unusual nature of lightning on the gas giant, according to two new studies published in Nature on Wednesday.

We've known that Jupiter has lightning for nearly 40 years, after the first probes went out there. But Juno has discovered that these natural discharges occur most at the polar regions, whereas on Earth the bulk of strikes are found on or near the equator.

"Jupiter lightning distribution is inside out relative to Earth," said said Shannon Brown, lead author of the paper and a Juno scientist.

"There is a lot of activity near Jupiter's poles but none near the equator. You can ask anybody who lives in the tropics - this doesn't hold true for our planet."

Earth’s equator receives much more sunshine than Jupiter's, since its much closer to the Sun, and the warm moist air there is more likely to rise through convection. This creates convective water clouds, where liquid and solid ice precipitation mix together and this generates a separation of electric charge to kickstart lightning, Brown explained to the The Register.

Although Jupiter’s equator is also warmer than its poles, scientists believe that it's down the stability of the atmosphere. At the equator, it’s just warm enough that warm gas doesn’t rise, but at the poles the gusts are lifted, driving convection to create lightning.

There are still other mysteries, however. “We can’t explain why we see nearly twice the amount of lightning in the Northern Hemisphere of Jupiter than we do in the Southern Hemisphere,” Brown said.

“As we complete the remainder of the orbits in the mission, we’ll get a clearer and clearer picture of the distribution of lightning, which maps out moist convective activity on the planet. This will help us better understand the composition, general circulation and energy transport on Jupiter.”

The paper also details how these lightning bolts share similarities with those Earthside. Jupiter's recorded lightning strikes are typically smaller than on Earth, but not all the time, with most bursts have a frequency of about 600 megahertz, but which have the potential to reach gigahertz levels like the bolts seen on Earth.

“No matter what planet you're on, lightning bolts act like radio transmitters - sending out radio waves when they flash across a sky,"

"But until Juno, all the lightning signals recorded by spacecraft (Voyagers 1 and 2, Galileo, Cassini) were limited to either visual detections or from the kilohertz range of the radio spectrum, despite a search for signals in the megahertz range. Many theories were offered up to explain it, but no one theory could ever get traction as the answer."

The first sign that Jupiter’s atmosphere also produced lightning was in 1979, when Voyager 1 and Voyager 2 detected very low-frequency radio emissions known as whistlers that sound like a long whistle falling in pitch.

Whistlers are direct evidence for lightning. When lightning strikes, electrical currents zap the atmosphere and it creates radio waves known as atmospherics. These waves ripple through the plasma environment of Jupiter eventually turning into dispersed whistlers.

Violent, powerful wind that lasts 100s of years. Yes, it's Jupiter, not you after a Friday night curry

New data collected in Juno mission reveal that these whistlers are much more rapid and plentiful than previous thought. The Waves instrument onboard measuring electric and magnetic field samples found that the whistlers are only last a few milliseconds to tens of milliseconds, compared to the several seconds previously measured by Voyager 1 and Voyager 2.

Up to four lightning strikes were detected every second by Juno, a rate similar to thunderstorms on Earth, and six times the peak rates from old Voyager 1 observations.

More observations are expected, however, since NASA has extended Juno's mission by three years. The spacecraft was due to begin orbiting the Solar System's largest planet every 14 days after being jockeyed into position by the spacecraft's motors.

But a dodgy valve now means the spacecraft is stuck orbiting every 53 days. Since NASA thinks it will take another 34 orbits to complete mapping the planet the mission has been extended.

“To really understand Jupiter, you need to map it,” said Scott Bolton, principal investigator and associate vice president at the Southwest Research Institute. “If you were mapping Earth you wouldn’t just fly over the United States.” ®