Believe nobody except Aleksandr Kogan! 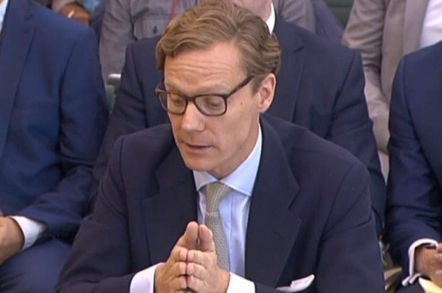 Sketch A defiant Alexander Nix has told MPs the Cambridge Analytica (CA) scandal was caused by lying media and the only person to trust is the one who wrote the app that quietly harvested personal data on more than 80 million people.

The ex-CEO at CA started the hearing in a tense standoff with Commons Culture, Media and Sport Committee chairman Damian Collins as he tried to read out prepared remarks before any questions were asked.

"You’ve agreed to come and answer the members’ questions," bristled Collins. "I’ve allowed you to make an opening statement and to go on now to the questions the committee wants to put to you. No, I will start the questions now."

Nix sat, stony-faced. "Mr Collins, I don’t think this is appropriate." Unamused, Collins hissed: "The way this works is we put questions and you answer them."

Nix said: "I urge you to revisit testimony of Dr Kogan. His is a very fair reflection of what happened – that's in contrast to people who weren't necessarily so involved such as Brittany Kaiser."

For anyone not familiar with the tale: data scientist Aleksandr Kogan wrote an app used on Facebook that allowed CA to slurp the personal details of tens of millions of people.

"CA received a small amount of data on 26-27 million individuals in the USA," Nix said.

So it went on. Tricksy Nixy ducked and then dived. After he told the committee he had personally poured "millions and millions of dollars to meet staff salaries," into CA once the media storm broke, Collins asked, given that Nix has officially parted ways with CA and the company is now in administration: "When was that?"

A blustering Nix replied: "I’d be happy to circle back to you.. I don’t think this is relevant to this committee hearing."

Then came the question of Julian Assange. During the American presidential elections of 2016, everyone’s least favourite cupboard-dweller* claimed he had got hold of emails from within the US Democratic party – and later went on to say CA had asked him for access to them, adding that WikiLeaks had rejected the approach.

"We have no relationship with WikiLeaks," said Nix. "I had absolutely no knowledge that Brittany Kaiser had met Julian Assange."

Chris Matheson, a frowning MP who was all glasses and purple tie, barked at Nix: "She was doing it on your time, and that’s not the first instance of things going on in the company that you weren’t fully aware of."

Pugnaciously, Collins added: "It came up in her evidence so you spoke about Assange saying you made an attempt to contact him … given you knew Brittany Kaiser had a route to Assange, why didn’t you just ask her if you wanted to get a message to him?"

Nix, taken off-piste by this twist, stumbled: "I think this demonstrates how much of a spur of the moment idea it was to reach out to them. It wasn’t something that was thought through. I read an article in the Guardian, Assange had access to these emails, and I simply reached across to my colleague to say, would you mind asking if he would share these with us. We didn’t strategise this … 10 days later we got a response saying no."

Nix’s admission that he is a Guardian reader is a bit strange, given that that paper’s Sunday stablemate, the Observer, has been the main source of the revelations that fired a fatal shot into his business and forced him out of Cambridge Analytica. Even though he knew his enemy well, Nix spared no opportunity during the hearing to have a pop at the Observer ("I can say the allegations made in the article are false") and Channel 4 News for what he described as "a very deliberate and coordinated programme of deception".

Christian Matheson MP, unable to keep an impish smile off his lips, observed to Nix: "You were a bit unlucky with that Channel 4 video weren’t you, Mr Nix? Because of all those business pitches that you’ve done and that you’ve done ethically, and the one that you did unethically was the one that was recorded."

"I think other business meetings are not steered by an undercover reporter who is deliberately trying to entrap you," a tart Nix shot back.

The Cambridge Analytica brouhaha continues. The company has since rebranded in America as Emerdata. ®

* He's been in Ecuador's central London embassy for over five years – since August 2012 – after jumping British bail to evade an EU-wide arrest warrant issued by Sweden, which sought to question him over rape allegations.