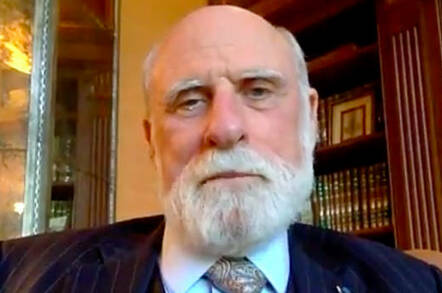 Co-inventor of TCP/IP and so-called "Father of the Internet" Vint Cerf has urged network nerds to "get with the program" on World IPv6 Day.

In a video to celebrate six years since the creation of World IPv6 Launch, Cerf offers optimistic impatience with the rollout of the next-generation network addressing protocol.

He notes that not only did IPv4 address space run out in 2011 (sort of) but that internet engineers anticipated the problem back in 1996 and so developed IPv6 to allow the internet to continue expanding unhindered.

Unfortunately, rollout has been much slower than everyone expected, mostly because people have figured how to do more with their existing IPv4 addresses, and because the shift to IPv6 remains pretty complex.

"It's certainly been a long time since the standards were put in place," Cerf reflected. "And it's time to get with the program."

It's worth noting that if it wasn't for Vint Cerf, IPv4 address space would have run out much, much sooner. In a story told to this reporter by Cerf – and no doubt to countless others over the past 30 years – when he was developing the protocols, he argued that it should be expanded to include more than a million addresses – and was met with bemused looks by his colleagues who couldn't imagine why their little computer network would need to include so many addresses.

The IPv4 protocol contains roughly four billion addresses – the vast majority of which are in use – whereas IPv6 offers 340 trillion trillion trillion separate addresses. In terms of scale, if all IPv4 addresses were contained inside a smartphone, IPv6 would fill a container the size of the Earth.

But people still aren't shifting and recent months have even shown a slowdown in the transition to the new protocol.

50 ways to leave your lover

Cerf offers two reasons for why organizations should shift: first, it is very hard to get hold of IPv4 addresses unless you go to one of the grey markets where they cost significantly more than IPv6 addresses; and second, he argues that even if organizations have sufficient IPv4 addresses, they should get IPv6 space for the sake of their users who may need them to reach parts of the internet that are predominantly IPv6.

We're not sure we buy that argument, in large part because those IPv6-only parts of the internet are mostly run by tech giants like Google – for who Cerf works – and who go to some lengths to make sure that they can be accessed by IPv4.

But it does raise the possibility of there being an IPv6 tipping point where so much of the internet is running on IPv6 that it causes everyone to jump onboard. There are, after all, some significant networking advantages to IPv6 that should result in faster connections.

To coincide with IPv6 Day, the Internet Society has put out some updated stats on the rollout.

PS: Yes, yes, we know, The Register is still IPv4, and not on IPv6. Word from our sysadmins is that we'll migrate Soon™