Data is better, down where it's wetter, under the sea 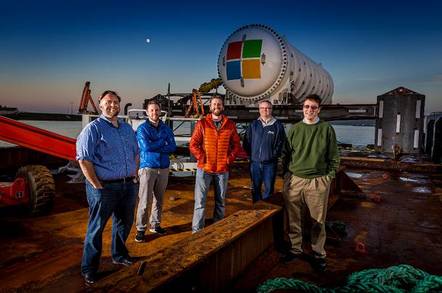 The Natick team, about to sink a data centre

Fish already dodging trawler nets in the North Sea off Orkney found another hazard to contend with this morning: a huge white tube of servers, emblazoned with the Windows logo.

Project Natick kicked off back in 2013, when a proposal for an underwater data centre caught the attention of Microsoft's top brass and led to a prototype being built and chucked in the Pacific off the coast of California in August 2015.

The capsule, named "Leona Philpott" for a character from the Halo game franchise, was a mere 3m by 2m and chugged away for 100 days at a depth of 30ft.

After being hauled up and shipped back to Redmond for analysis at the end of 2015, Microsoft's wannabe submariners moved on to Phase 2 of the project. While engineers were cock-a-hoop that Natick's pressure vessel had survived its time under water, the team had to tackle issues around dumping the heat from the equipment onboard and handling the effects of biofouling.

The result is the Phase 2 prototype, which was introduced to the sea off northeast coast of Scotland this morning.

The new iteration is considerably larger with a pressure vessel 12.2m in length and 2.8m wide. Within the cylinder lie 12 racks containing 864 of Microsoft's data centre servers, replete with Field Programmable Gate Array (FPGA) acceleration and 27.6PB of disk space.

Unlike the earlier iteration, the full-scale Phase 2 version runs entirely on locally sourced renewable power and Microsoft hopes that it will tick over for five years without intervention. The target lifespan of a Natick data centre is hoped to eventually hit 20 years.

Though the project remains what Microsoft are referring to as a "moonshot" and there are no concrete plans to create an Atlantis region for Azure as yet, management clearly think the idea has, er, sea legs.

Being able to deploy new Natick modules within 90 days to scale up local data centres is an attractive proposition. But the same challenges faced by Phase 1 remain.

The things need power, and while Orkney is home to the European Marine Energy Centre, and so well placed to ensure Microsoft's environmental credentials are as fresh and minty as possible, the same will not be true of all offshore locations.

The locations themselves may also present a challenge, requiring data and power lines to be slung out to sea, unless Redmond can persuade the cable operators to allow them near their precious pipes. And consideration will have to be given to the needs of local fishing folk among others.

However, with land-based data centres consuming 4.8 litres of water per kilowatt hours for cooling (according to Microsoft) compared to Natick's zero, there are clear benefits. The challenge will be what the actual total cost of ownership ends up being for a Natick-based data centre versus something squatting on land. On that, Microsoft is keeping quiet. ®