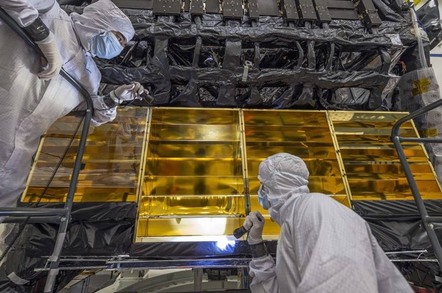 While the spaceship name Heart of Gold was taken by the late, great Douglas Adams, NASA has come up with something similar for its forthcoming space telescope.

The ISIM and the Optical Telescope Element (OTE) are separated by a sunshield from the warm sun-facing side of the JWST, where the spacecraft bus resides. The sunshield is designed to cool the area around the telescopic gear down to about 50 K, -370°F, or -223°C.

The near-infrared instruments (NIRCam, NIRSpec, FGS/NIRISS) are designed to get a bit cooler still (39 K, -389°F, or -234°C), with the help of a passive cooling system. And the mid-infrared instrument (MIRI) relies on a helium-based cryocooler system to achieve an even more brisk operating temperature (7 K, -447°F, -266°C).

The bulk of the telescope's electronics, which generate infrared radiation in the form of heat, reside in a separate compartment below the ISIM. Such segregation keeps the toasty gear from interfering with the cryophilic instruments and optical components.

NASA's light collection contraption incorporates a heat diffusion mechanism in the form of baffles – structural vanes that alter the flow of material or energy. Where the telescope's mirrors focus incoming light, its baffles direct and disperse heat radiating from internal systems.

And these aren't just any baffles. They're coated in gold.

"Gold has a very high reflectivity in the infrared spectrum range, so it is ideal for directing heat," said Matthew Stephens, a mechanical systems engineer for Webb at NASA’s Goddard Space Flight Center, in a statement. "This is the same reason all of the primary, secondary, and tertiary mirrors are gold-coated."

It's also a reminder of the project's cost, estimated to be about $8.8 billion by the US Government Accountability Office. ®