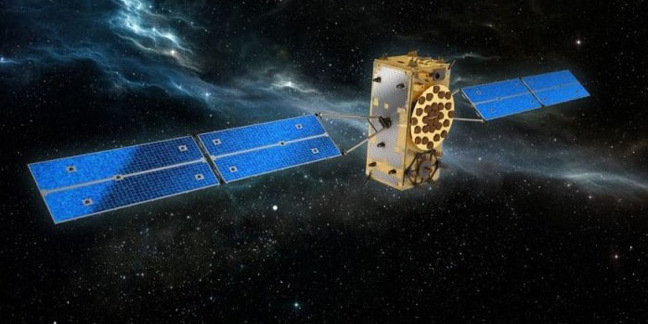 Unperturbed by posturing in the UK and EU, the European Space Agency has welcomed the latest pair of Galileo satellites to its spaceport in Kourou, French Guyana, ahead of a July launch.

Satellites 25 and 26 will join their siblings, the imaginatively named 23 and 24, aboard an Ariane 5 to be flung into an orbit 23,222 km above the earth as part of the project's growing constellation. The more whimsical person may prefer to use the names assigned by 2011’s competition winners: Tara, Samuel, Anna and Ellen.

The UK’s winner, Patrick, is not scheduled to launch until 2020. Although with the war of words over the Galileo project, amid that little thing called Brexit, there is every chance the name “Hans” might be slapped on the satellite instead.

Of the 22 satellites launched since 2011, 21 remain functional with 18 usable after Satellite 4 (aka Sif) experienced a power problem some way short of the expected 12 year lifespan. Sats 5 and 6 were launched into the wrong orbit, and the European Commission is still pondering whether they can be full members of the constellation or not. Sat 8 was removed for ‘constellation management purposes’ at the end of 2017.

July’s launch will therefore take the fleet to 22 usable spacecraft, just two shy of the full complement of 24 once commissioning is complete. Subsequent launches will provide spares for the network as the original satellites reach the end of their design lifetimes.

That end might come sooner than expected if the clocks onboard the spacecraft keep failing.

As the performance of the constellation will degrade should the satellite count drop below 24, getting those spares launched is important to ensure a smooth transition. Procurement by the European Commission is underway for new batches of improved versions of the satellites to see the constellation through the 2020s.

It is the allocation for work on this next generation of satellites (as well as access to encrypted data) that has got the UK government in such a lather, with UK firms unable to bid unless work happens in EU countries. A block on this procurement by the UK would see a delay in launches, with a knock-on effect on the performance of the constellation. ®

AT&T tracked its own sales bods using GPS, secretly charged them $135 a month to do so, lawsuit claims

See, it's not just users getting shafted