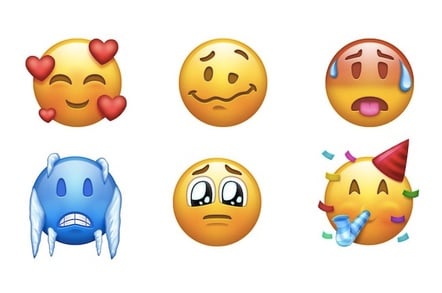 Some of the new emoji introduced by Unicode on Tuesday

Brace yourself, world: the Unicode Consortium unleashes version 11.0 of its Emoji and general standard on Tuesday June 5th, and will right the terrible wrong that is the absence of red-headed emoji.

Emoji 11.0 of Unicode’s eponymous standard will also add curly hair, white hair and bald heads. Those additions, and red hair, are all “components” that can be layered onto other emoji.

Other new additions include emoji for a softball, kangaroo, llama, a “partying face” and a lobster.

With a nod to emojis’ enormous popularity in Asia there’s also a moon cake and a red gift envelope, items associated with Chinese festivals.

Superheroes and supervillains have also been added to the lexicon, along with a “Smiling Face With Smiling Eyes and Three Hearts” that apparently depicts being in love.

It may be a while before these emoji appear anywhere, because device-makers have to get off their posteriors and actually draw them distributed them to devices.

And if you think this whole emoji caper is a sign of civilisation’s imminent doom, Unicode 11.0 has also added Mayan numerals (PDF). ®