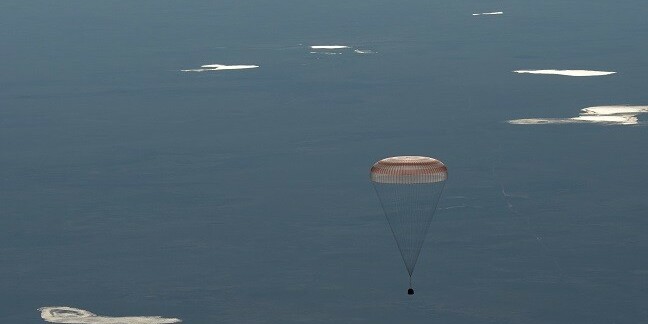 SpaceX finally got the SES-12 comms satellite into orbit this morning while a trio of International Space Station (ISS) crew members returned in a trusty Soyuz capsule after 168 days in the black.

Delayed from 1 June due to an unspecified issue with the second stage of the two stage Falcon 9, SpaceX reset the clocks for a generous four-hour launch window, starting at 0429 UTC this morning.

With the weather cooperating, the "flight-proven" Falcon 9 (originally used to send a secret squirrel spaceplane to do nefarious things in orbit) left the Space Launch Complex 40 (SLC-40) pad at 0445 UTC, marking the 10th flight of a Falcon 9 this year (not counting the three that sent Elon Musk's Tesla into space).

It is also the seventh launch from the rebuilt launch pad since SpaceX comprehensively blew it up during the fuelling of a Falcon 9 prior to an engine test in 2016.

The first stage burned for two minutes, 44 seconds before being dumped into the ocean. Since SpaceX has moved into the bright new Block 5 world, recovering older Block 4 boosters is less of a priority, and the extra fuel available to loft a payload as heavy as the SES-12 to a Geostationary Transfer Orbit (GTO) is most welcome.

The second stage cut off for the last time 27 minutes after launch and SES-12 was deployed five minutes later. The customer, SES, confirmed the spacecraft was in the correct orbit and that engineers had been able to establish communications with the satellite.

The event also marked an increase in launch frequency, up from seven at the same point in 2017.

However, other ambitious SpaceX plans took a knock over the weekend with SpaceX's James Gleeson confirming what had become painfully obvious – SpaceX won't be sending tourists around the Moon this year.

SpaceX trumpeted Musk's lunar ambitions in an early 2017 statement, claiming that two private individuals had ponied up the requisite readies for the jaunt.

However, the same statement also promised that the Crew Dragon capsule would be flying to the ISS by the end of 2017, which didn't happen.

With the first uncrewed demonstration flight of SpaceX's new capsule not due until the latter half of the year, flying customers to the Moon in 2018 had seemed unlikely for quite some time. As for a new date? SpaceX are wisely not saying.

SpaceX's next launch will see another Falcon 9 fling the cargo version of the Dragon spacecraft at the ISS on 28 June.

Three crew down, three more up this week

While SpaceX continues to do miraculous things with both landing rockets and stretching schedules beyond breaking point, the workhorse Russian Soyuz capsule performed its own quiet miracle yesterday, in the form of once more safely returning three ISS crew members to Earth.

With over 50 years of service, the Soyuz spacecraft remains the only way to get humans to and from the ISS in spite of continued promises and schedule slips from the likes of SpaceX, Boeing and NASA.

Shkaplerov, celebrating his elevation to number 16 in the all-time spaceflight record books with 533 cumulative days in space over three missions, also set a Russian spacewalk record. His extravehicular activity with fellow cosmonaut Alexander Misurkin, wrestling with an uncooperative antenna on the Russian segment of the station, lasted a record eight hours, 13 minutes.

The three crew members left aboard the ISS will soon receive new chums, with the next Soyuz due to carry another three crew to the orbiting platform from Baikonur Cosmodrome, Kazakhstan, on 6 June. ®