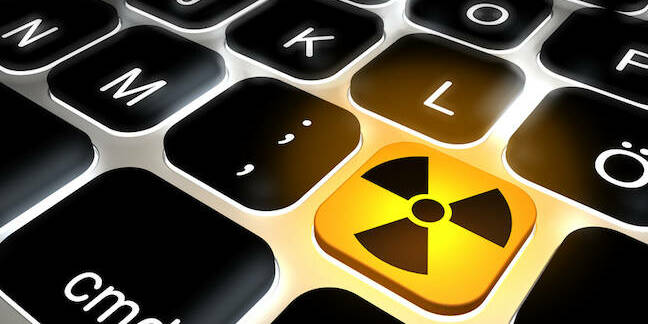 Russian boffins at the Moscow Institute of Physics (MIPT) have emitted a prototype nuclear battery packing 3,300 milliwatt hours of energy per gram.

The paper, published in Diamond and Related Materials, describes a betavoltaic battery powered by the beta decay of the nickel-63 isotope giving 10 times the power of conventional commercial cells.

Betavoltaics themselves are nothing new, using semiconductors to convert the energy of beta decay into electricity, and found use briefly in the 1970s in pacemakers due to their longevity. However, cheaper chemical batteries with their higher power densities (if shorter lifespans) won the day.

The public perception and fear of all things radioactive at the time did the concept no favours either.

The team at MIPT have come up with a way to deal with the power density problem by using nickel-63 as the power source (and a known quantity thanks to earlier research in both Russia and Bristol) and Schottky barrier-based diamond electrodes for the energy conversion in a novel configuration.

200 of the diamond converters were interlaid with nickel-63 and stable nickel foil layers, with the power generated dependant on the thickness of the foil.

If the foil is too thick, the emitted electrons cannot escape due to self-absorption. However, make the foil too thin and the number of atoms undergoing decay over time is reduced. Using simulation tools, the team calculated that the sweet spot required the nickel-63 foil be 2 micrometres thick with the Schottky barrier diamond converter at 10 micrometres.

Manufacturing the converters presented its own particular challenges, with the team developing a way of growing diamond plates on a diamond substrate by first creating a damaged layer in the substrate through ion implantation, growing boron-doped diamond film on top and then using annealing to allow the recovery of the top layer.

Once the damaged layer was separated by electrochemical etching, the converter was fitted with ohmic and Schottky contacts.

Boffins used the process to create 200 converters from 20 substrates, stacking the things with the nickel-63 foil to create a battery with an open-circuit voltage of 1.02 V and a current of 1.27 μA.

With a power density per cubic centimetre of 10 microwatts, a more economical manufacturing process and nickel-63 having a half life of 100 years, the researchers see potential for the battery to be used as a power source that does not need to be replaced in medical devices such as pacemakers.

The team also see opportunities for use in powering spacecraft systems such as memory chips with their own power supplies.

Going forwards, the boffins reckon that enriching the nickel-63 would proportionately increase the power, as would switching from a Schottky barrier diode to a diamond P-I-N structure.

With a shortage of nickel-63 production in Russia until at least the mid 2020s the team are also considering the possibility of using the diamond convertor technology with alternative isotopes such as carbon-14, which has a half life of 5,700 years.

The team in Bristol published research into using the carbon-14 isotope in 2016, incorporating the nuclear waste into a man-made diamond to ensure no unpleasant short-range radiation can escape.

Incorporating the Russian technology to boost power output would see more applications for the technology than just long-term low-power scenarios. ®