Not enough time to even call Bruce Willis and Armageddonoutofhere 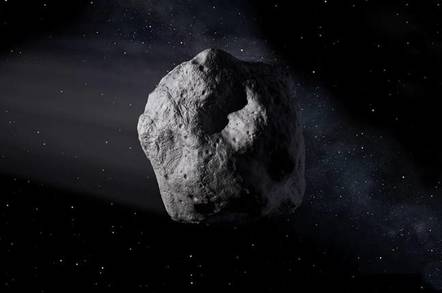 Video Scientists at NASA's Planetary Defense Coordination Office have made a rare sighting – an asteroid on a collision course with Earth.

The rock, dubbed 2018 LA, was picked up by the Catalina Sky Survey on Saturday morning, just hours before it piled into our home world at a speed of 10 miles per second, or 0.5368 per cent of the maximum velocity of a sheep in a vacuum in El Reg units.

However, since the rock in question was just six feet (two metres) across, no one panicked about imminent doom. It burned up and burst into scraps in our atmosphere.

"The discovery of asteroid 2018 LA is only the third time that an asteroid has been discovered to be on an impact trajectory, said Paul Chodas, manager of the Center for Near-Earth Object Studies (CNEOS) at the Jet Propulsion Laboratory in California, on Sunday.

"It is also only the second time that the high probability of an impact was predicted well ahead of the event itself."

The astroboffins only managed to get a couple of readings on the asteroid's trajectory, and thought it would strike somewhere in southern Africa, the Indian Ocean, or possibly New Guinea. The rock hit Earth's atmosphere at 1644 UTC on Saturday, and a webcam in Botswana caught a glimpse of the meteor as it exploded several miles above the Earth's surface.

"This was a much smaller object than we are tasked to detect and warn about," said Lindley Johnson, Planetary Defense Officer at NASA Headquarters.

"However, this real-world event allows us to exercise our capabilities and gives some confidence our impact prediction models are adequate to respond to the potential impact of a larger object."

NASA scans the skies regularly for asteroids and comets that could be a threat to life on Earth. The space agency is focused on saving lives and property by predicting where an asteroid will strike. One hopes when a really big intergalactic boulder comes our way, NASA will be able to give us a decent heads up.

Earth gets a clobbering from a large asteroid about once every six months, and NASA's plan is to one day be in a position to deflect the really problematic ones before they get here. Proposals include trying to hit one with nukes or a spaceship, or blast them with lasers, or even fire paintballs to let solar radiation shift the rock, but none are practical at the moment.

Thus, NASA has focused on trying to spot these objects so people in the impact zone can be warned. Even a couple of hours of notice could greatly reduce the number of casualties in the event of an cosmic prang.

Unfortunately, the problem is a tricky one. Plenty of asteroids reflect little light, and if they are barreling straight toward us then they are doubly difficult to spot. When a serious civilization-threatening asteroid approaches, our best bet right now is to either leg it or batten down the hatches, and make sure we have a space program to keep some survivors safe off-world. ®