Which bright spark should we blame after this illuminating revelation of current affairs? 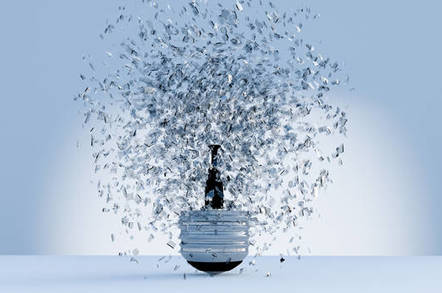 Philips' Hue smart-home lighting has had an embarrassing outage with its API going offline for four hours on Thursday, preventing customers from accessing the system remotely.

On the same day that the company launched its new service – where its lights will respond automatically to streaming music and games – the system died for anyone trying to activate the hardware while outside their house, or using voice control. In-home control was unaffected.

The loss of remote control mirrors a similar outage with Nest earlier this month where customers were unable to use the Nest app remotely to unlock doors or turn off/on its security alarm.

Neither company has provided an explanation for what went wrong, but based on anecdotal reports and a rough understanding of how the systems work, it looks a lot like a DNS issue in both cases.

That could be a misconfigured DNS server, or a mistake in the code of a software update, or possibly a DDoS attack on specific servers from potential extortionists. We have asked both companies for a more detailed explanation.

"We are aware of the current issue linked to remote connectivity (out of home, voice control). We're working hard to solve the issue asap," the biz stressed on its Twitter account.

An hour later it promised it was making progress on the issue and then three hours after that message said the issue was "Solved! All systems are good to go" before offering "sincere apologies for the inconvenience caused. We are fully investigating the root cause to avoid and prevent any reoccurrence."

It's hard to make much from that message but the fact that voice control was affected whereas local control wasn't would strongly suggest an internet-based problem, because we understand that voice controls on the Hue system are send up to the company's servers to be understood and then the relevant control sent back down to the system.

We can't really think of any good reasons why remote control of Hue lights would be useful. But that is besides the point: the one big factor preventing a broader update of smart home products is the concern that their connection to the larger internet opens the system up to potential hacking, or unexpected problems.

Such as earlier this month when Amazon's Alexa went rogue and decided it had heard one couple telling it to send a message to someone in the husband's contacts list, and then recorded and sent a discussion about hardwood floors to one of his employees without them realizing.

The outages themselves are often short-lived and so far we haven't seen any connection to hacking to the theft of information, but they are a constant reminder that connecting anything to the internet brings with it risks. ®

Philips backs down over firmware that adds DRM to light