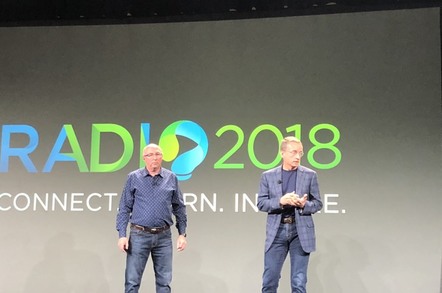 "Technology companies are not guaranteed a second act," he said.

Twenty years on, VMware, now under the oversight of Dell, at least has a second wind.

Virtzilla's stock price has climbed more or less steadily since 2016, reflecting belief in its plan to abstract everything and anything in the data centre. latterly expressed with its new Virtual Cloud Network and NSX software.

The company has come a long way from its first office, referred to as "the crack house" by discussion panelist Scott Devine, co-founder and principal engineer, for its dilapidation and leaking roof rather than any association with contraband.

And now the biz is attempting to reinvent itself as a SaaS shop, Adobe-style.

But the virtualizer still has some distance to travel before it secures a place in the cloud-shrouded promised land, where the tantalizing prospect of recurring subscription fees and customer lock-in await.

VMware isn't likely to become the next BlackBerry. But it could still trace the trajectory of Oracle, a legacy enterprise firm that despite heavy spending remains a niche player in the public cloud market.

Eager to preclude that possibility, O'Farrell spoke of "innovation" over and over again.

"Revolutionary companies must innovate not just in the product but in everything they do," he said.

O'Farrell presented a chart of technologies depicting fields in which VMware is supposedly innovating ... or at least plans to.

Examples of this innovation that could be discussed without entering into a non-disclosure agreement were scarce.

But that fits with the purpose of the Radio conference – it's an internal technical event and conceptual pep rally for VMware engineers, not a public product showcase. (We're told this was the first time journalists were invited.)

Instead of new products held out as instances of innovation, the menu relied heavily on pronouncements about corporate values, as if good intentions would lead inevitably to revolutionary products and results.

Perhaps they will. CEO Pat Gelsinger spoke about how a comment from his father opened his eyes to the perniciousness of racism. Citing McKinsey research, he insisted that diverse companies perform better than their more homogenous peers.

"Overall, tech sucks at diversity," he said, adding, "We have to become comfortable with the uncomfortable."

Anyone who has flown coach understands that sentiment but let's allow for the moment that inclusive policies count as innovation. VMware deserves some credit for trying to live up to its leader's aspirations.

At a pre-event mixer on Tuesday, a handful of VMware leaders went into a bit more detail about the kind of research the company thinks will make its second act engaging.

VMware is researching blockchain technology, said chief research officer David Tennenhouse, motivated by both the company's commitment to sustainability and its interest in exploring enterprise-relevant ideas, such as federated ledgers.

"To be honest, we looked at this and just said it's immoral," he explained. "This sort of protocol is not a reasonable way for our industry to move forward. It's not acceptable."

So VMware instead is investigating Byzantine Agreement protocols, which turn out to suit federated systems where anonymity isn't an essential aspect of transactions.

The company is also pondering ways to save energy through virtualization, as Nicola Acutt, VP of sustainability strategy, explained.

Part of making the transformation from a vendor of customer-installed software to a biz that runs software for its customers involves gagging on its own dog food.

For VMware Cloud on AWS, that means learning to take software developed for on-premises installation and transforming it to be easy to run as a service.

"We've known for a long time that installing and patching our software is painful," said Tarsuk-Levin. "And we've made steps to try to improve that over the year, but this is one of the first times we've really felt that pain ourselves. ...The challenge of upgrading every quarter at scale is immense."

Kit Colbert, CTO of VMware's cloud platform group, suggested VMware is up to that challenge.

"I think we're very much following the Adobe model," he said. "It's pretty crazy the level of changes happening internally at VMware. There's a huge effort around cloud transformation. That is, how to we move to a SaaS-first type of delivery for our software. Even though most of our revenue doesn't some from SaaS, we believe it's a fundamental transition." ®