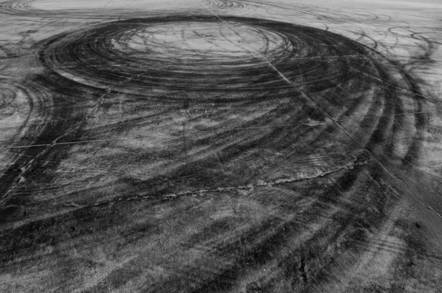 An American camera drone startup has come up with an eye-opening new feature for its products: automatic car following.

Skydio, a Californian upstart that makes, as its blurb says, "flying tools that free your hands and mind" (aka small autonomous aircraft fitted with cameras), has declared that its Skydio R1 quadcopter is now capable of following vehicles around while filming them.

"With the software update available today, R1 users now have the ability to follow cars and other vehicles. It is perfect for capturing all of the action on your next adventure, from off-road 4x4ing, autocross racing, to following your golf cart on the course," burbled a statement from the company.

Follow-me mode is not a new concept for drones, particularly ones touted as mobile cameras for film or video projects. French dronemaker Parrot already offers follow-me mode for some of its range, as does Chinese firm DJI. The idea of a vehicle-specific follow-me mode is subtly different, though, inasmuch as it is touted explicitly as having been designed to recognise and follow vehicles rather than just staying at a pre-defined orientation and distance from the base station.

Naturally, Skydio is plugging into the fashionable AI and machine learning marketing hype, declaring that the R1 "runs neural networks" and is capable of following cars as a result of "training these networks on large datasets of labelled images of automobiles".

Skydio itself is backed by a fistful of investment houses including Andreessen Horowitz, as well as chipmaker Nvidia, whose Jetson TX1 board is in the R1 drone. In turn, the heart of the Jetson board is a Tegra system-on-chip; details for the whole module are on Nvidia's website, for the curious.

Being devious individuals, Vulture Central can think of a few amusing ways to (mis)use a car-chasing drone. For example, you could quietly place a can of expanding foam next to your enemy mate's radiator, tell the drone "chase!" and giggle inanely at the livestreamed footage as the inevitable bursting of foam occurs. Not, of course, that we endorse this kind of idiotic tomfoolery in any way, or the filming of such activities. ®