Millions could be spent extending today's tech until some 'future date' 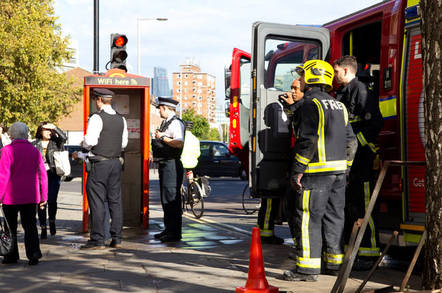 Emergency crew might be hanging onto those Airwaves. Pic Michael Puche/Shutterstock

Exclusive The UK government is contemplating "a complete or a partial shutdown" of its ambitious programme to shift blue-light services from bog-standard radio to 4G, The Register can reveal.

The Home Office's Emergency Services Mobile Communication Programme (ESMCP) was supposed to replace today's Motorola-owned Airwave radio service with a £1.2bn 4G Emergency Services Network (ESN) run by EE. It also intended to kit out emergency services with 4G-enabled devices ahead of Airwave being switched off by 31 December 2019.

However, the Home Office is in the process of resetting the scheme amid further delays and will publish its review of the programme in July.

The cost of extending Airwave is expected to total between £360m and £475m per year.

Sources have said that Airwave may need to run for another five to 10 years until it is ready. Motorola's chief exec has already said the supplier expects to extend Airwave for another five years.

According to an update on the programme, seen by The Register, two proposals have now been put forward ahead of the review.

The first option suggests an incremental rollout of ESN, including a data-only option – where emergency services retain Airwave for voice and use 4G devices for data only, as well as a contractual commitment to continue to run Airwave until all shutdown criteria are met and customers no longer wish to pay for the service.

The second suggests an effective shutdown of ESMCP for the emergency services until an unspecified future date.

The document states that, irrespective of which option is chosen, the Home Office will make "significant changes to the structure and delivery of ESMCP" and has already started "reductions of contractor support".

A Home Office spokeswoman said: "This a complex project which will provide the emergency services with the most advanced communications system of its kind anywhere in the world. We keep the delivery of ESN and the continued use of Airwave under constant review. We have not made any decisions about extending relevant contracts.

"We will have a clearer picture of delivery timescales once the ongoing review of the Programme is complete."

The department has said it will not expect the emergency services to use the network until they are satisfied it will support them in operations.

One contact working in the emergency services said: "Airwave provides very good voice coverage due to its use of a low frequency (so poor for data) and is regarded as functionally very good. Nobody had a lot of faith that a 4G network was going to be able to provide similar voice coverage."

He added that there are also issues around the new devices being rigged up for push-to-talk.

"From the information we received, the new 4G devices were looking to be more expensive and/or more fragile than current replacement Airwave devices," he said.

"All in all, the project from the end users' point of view just seemed in a mess and some way off having a real product they could actually trial let alone fully deliver."

Home Office permanent secretary Philip Rutnam told Parliament's Public Accounts Committee in November that challenges existed relating to the software design "and as our relationship with our suppliers evolved, we have come to see clearly the need for not just a nine-month delay but a new approach to schedule and cost, in which we can have lasting confidence".

Concerns have also been raised about enabling 4G on the underground.

According to the UK's National Audit Office, Airwave has served the emergency services effectively, and has averaged 99.9 per cent availability since April 2010.

"It is, however, an expensive system, costing £1,300 per handheld or vehicle-mounted device per year, and its data capabilities are poor. When fully operational, ESN is expected to cost £800 per device per year," said the watchdog. ®