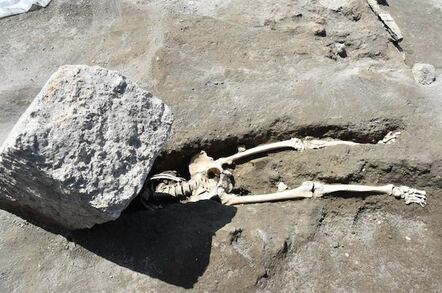 The skeleton of a man killed by a stone in Pompeii. Source: Parco Archeologico di Pompei's Facebook page

Archaeologists have found a headless body in Pompeii and concluded that his skull was removed by a big rock pushed into his path by the pyroclastic flow that presaged the city’s doom.

The Parco Archeologico di Pompei’s assessment of the find suggests “that the individual survived the first eruptive phase of the volcano, and subsequently sought salvation along the alley now covered in a thick layer of lapilli [rocks ejected by a volcano].”

But that plan didn’t work out: “A formidable stone block (perhaps a door jamb), violently thrown by the volcanic cloud, collided with his upper body, crushing the highest part of the thorax and yet-to-be-identified head”.

Anthropologists on site believe the skeleton belonged to “an adult male, over 30 years of age” and with ““lesions on the tibia [that] indicate a bone infection, which could have caused significant walking difficulties, enough to impede the man's escape at the first dramatic signs which preceded the eruption.”

Pyroclastic flows or clouds are currents of hot gas and plenty of solid material that flow out from an erupting volcano, at speeds of up to 700 km/h. And as we can see from this sad case, such flows can push hundreds of kilograms of dense material.

The deceased was not the only victim have had trouble escaping from the eruption of Vesuvius in 79 AD due to a limp – archaeologists recently unearthed another skeleton that showed signs that indicated walking difficulties. The letters of Pliny the Younger, a Roman who witnessed the eruptions, also tell us of mass panic near the volcano at the time of the eruptions. ®

Bootnote: Yes, we know that Pompeii was smothered in ash, not lava. But we couldn't resist the headline.