How's this any different to advertising in a teen mag, asks social network 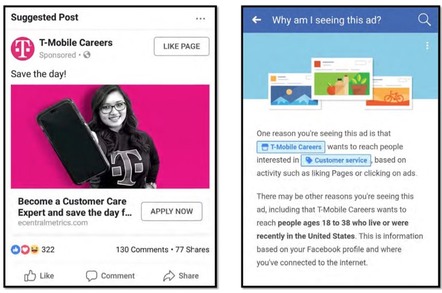 Precise ... One of the cited examples of alleged discriminatory adverts

A lawsuit alleging that Amazon.com, Cox Media Group, Cox Communications and T-Mobile US used Facebook ads to discriminate against older jobseekers has been expanded to finger other organizations, including Facebook.

Essentially, when buying ad space on Facebook, you can tell the social network to only show your post to people of a certain age or skin color as well as the usual stuff like location. This means ads can be configured to only appear to young people, or white people, and so on, which doesn't exactly promote equal opportunities.

In a San Francisco federal court on Tuesday – on the heels of an ad transparency push for political and issue ads – the complaint was amended to accuse thirteen more companies of using Facebook's ad platform to target young workers and exclude elders.

The list of organizations that allegedly used Facebook's ads system to unfairly target the young is likely to get longer still. The revised complaint defines the proposed class of defendants as any company or employment agency that employs at least 2,500 workers annually, or refers that many for employment, and used Facebook's ad tools to send job ads that include an age limit.

The complaint suggests the number of possible defendants could number in the hundreds. It claims:

In the exhibits filed with the complaint, an example Amazon fulfillment job advert seeking part-time workers in Rockville, Maryland, includes a link to an explanation about why the targeted individual was shown the post. The notice explained: "You are seeing this ad because Amazon Fulfillment Jobs wants to reach people ages 18 to 54 who live or were recently near Silver Spring, Maryland."

In another one of the exhibit ads, Facebook can be seen using its own advertising platform targeting tools to ensure that only those in the 21 to 55 age range see its solicitations to visit the Facebook Careers site. A T-Mobile careers ad is aimed at people ages 18 to 38.

According to the complaint, the default age range for Facebook ads is 18 to 65-plus, but Facebook encourages advertisers to tailor the ad more narrowly for greater effectiveness.

Beyond targeting ads by age, Facebook offers advertisers demographic filtering in the form of "Lookalike Audiences" – a demographic mirror of a company's current employee base – and categories like "Young & hip" and "Millenials" that serve as a proxy for young workers.

"While Facebook makes it possible to limit which Facebook users will see an ad based on age of the user (including employment ads), federal, state, and local law prohibit age discrimination in advertising and recruiting for job opportunities," the complaint stated.

In December, Facebook veep of ads Rob Goldman dismissed the notion that the company's age-filtering ads represent illegal discrimination. While acknowledging that US law prohibits discrimination in employment based on protected characteristics, he suggested that showing job ads to specific age groups is akin to running employment ads in magazines or on TV shows that attract a specific audience. Age-limited ads, he said, are not discriminatory if they're part of a broader marketing campaign.

"Used responsibly, age-based targeting for employment purposes is an accepted industry practice and for good reason: it helps employers recruit and people of all ages find work," he said.

It's not immediately clear whether companies are using age-based targeting responsibly. But a study published last year by Visier, a cloud-based analytics service for HR types, found that the average tech worker is five years younger than the average non-tech worker, and that workers age 52 to 70 have a harder time being hired than younger workers. ®