Is your smart device a bit thick? It's about to get a lot worse

Don't trust consumers with their own data 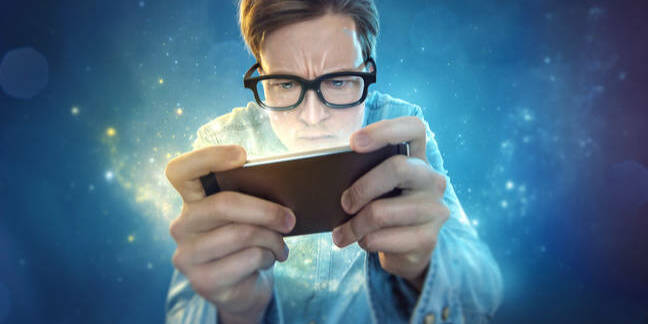 Something for the Weekend, Sir? Hooded eyes are following my keystrokes. Hidden ears are analysing every shuffle.

Deep inside its circuitry, my laptop is tutting and rubbing its silicon chin. I am trying to write another weekly column for a notorious IT-themed scandal sheet and my computer does not like what it detects as I tickle fitfully at the keys.

Public admissions by Facebook and Google that their software seemingly tracks your every hand and eyeball movement, even when you're not using Facebook or Google – possibly even after uninstalling it, switching your smartphone off and tossing it onto a bonfire – simply confirms what most of us here already suspected. There's no escaping the menacing watchful eye of Big Zucker.

Lots of the little guys are at it too, often brazen enough to present their spy software's invasive routines as a selling point. "It's good for your health!" they proclaim, while quietly notifying their lawyers that a lot of work might be coming their way soon.

The keystroke logger, for example – previously considered one of the most devious and reprehensible types of unwelcome hack – is now being sold back to us as a mental health analysis tool.

Subtle changes over time in the way in which you attack your keyboard can indicate your degenerating cognitive and emotional state (it says here). Oh, and if you've got one of those voice-controlled thingies in your living room, it will set off the klaxons if your speech patterns begin to alter.

Hang on, you cry, surely these are examples of spy technology being employed for good reasons with health benefits in mind? Sure, whatever. Believe that if it makes you feel warm and snuggly.

I'm not so paranoid to believe that it's all done with evil intent by some British-accented villain chuckling "excellent, excellent" while watching us on a remote monitor from his lair in a hollowed-out volcano. What worries me is that the software will not be very good. Anyone who owns smart devices will know that they tend to be a bit thick.

For example, my Fitbit wristband is connected to my full online profile and fitness data via a smartphone app. It knows my gender, age, height, weight, body fat, exercise record, and so on. It tracks how deeply or restlessly I sleep and automatically detects when I go to bed and get up in the morning.

It knows when to prompt me to get moving after set sessions of sedentary work. It interprets my movements in real time as a record of calorie burn according to the increasingly rich historical health data it is building up about me. It knows every key aspect of my physical being.

Yesterday, it offered to track my periods.

No wonder millennials look so exhausted.

I blame half-arsed programming by inadequately trained bluffers failed by the education system. For evidence, m'lud, I call before the court Exhibit X: "2014, The Year of Code" – a UK government initiative headed by a person who didn't actually know what programming was but went around berating children and journalists for their lack of coding skills.

Four years of IT course graduates have hit the market since then. The result? My Fitbit's updated AI has determined that I might be menopausal. Now that's advancement.

It's a shame Fitbit programmers don't know how to interpret a simple datum such as Male / Female / Still Deciding but at least I chose to give it to them with a full appreciation on how it would be subsequently slurped and churned. Social media and search engines, by contrast, gather and wilfully misuse it on the sly.

The good news is that the biggest intrusive organisations are at last being hauled in front of government committees for public scrutiny. The bad news is that these organisations are either ignoring these wimpy attempts at haulage or turning them into PR events, jetting in accompanied by an uncommonly besuited entourage of business nerds and blowing a bit of Siliconwood glamour through the dusty corridors of power.

On both sides of the Atlantic, elected representatives of government not so much grilled Zuckerberg as fawned at him. Instead of exposing his evasive answers for the delaying tactics they were and tearing him a new arsehole, politicians lined up to flatter him by declaring they had Facebook accounts themselves. They'd been sitting on his Face for years, apparently.

It just goes to show that influential and well-connected people can get away with anything, even if their success is due entirely to luck and timing rather than those much unloved factors of the modern era, talent and quality. If you should ever be foolish enough to demonstrate the last two, your influential and well-connected peers will fall over themselves to suppress, discredit or, worse, ignore you.

You're only allowed to be truly clever after you're dead: think Alan Turing, Louis Le Prince, Hedy Lamarr. How Einstein slipped through the net is anyone's guess.

I'm always reminded of singer-songwriter David McWilliams whose insanely catchy 1967 song Days of Pearly Spencer was a chart-topping hit across Europe… but not in the UK where it was originally released. Why? Because some self-important deadhead at the BBC chose to blacklist him for having friends who worked at (pirate) Radio Caroline.

Anyway, it's about to get much worse. You know how you wake up, switch on your phone and get told it's International Paperclip Day or World Dibber Month or some such bollocks? Well, we've just reached the end of Smart Home Week.

For those who actually knew about this, I hope you enjoyed participating in the propagation of unruly and intrusive devices in the domestic space. Judging by current standards of software programming, I look forward to buying a robot that chases me around the house, pestering me to buy another packet of tampons.

Leading the charge to this bright, new and highly absorbent future is a UK government white paper proposing a 13-point Code of Practice for IoT developers. It's full of useful stuff such as telling developers to ensure personal data gathered by IoT devices is kept completely secure through encryption, despite the government itself pushing for legislation to prevent developers from doing any such thing.

Not least, the white paper describes "stakeholders" in the IoT field who must follow the Code of Practice – significantly failing to include consumers among them. One supposes that governments don't think consumers of IoT products should have a stake in their own data. Suddenly, those hero-worship Zuckerberg love-ins masquerading as interrogations begin to make sense. Withering, they stand and stare through eyes that neither know nor care.

Alistair Dabbs is a freelance technology tart, juggling tech journalism, training and digital publishing. At a press launch for another brand of fitness tracker, he was shown a wristband that displayed textual messages along the band itself. When he jokingly asked whether the text would be upside down if the device was worn on the opposite wrist, the company reps just stared at each other in confusion. No-one suggested turning the wristband around. These are the companies building our IoT future.