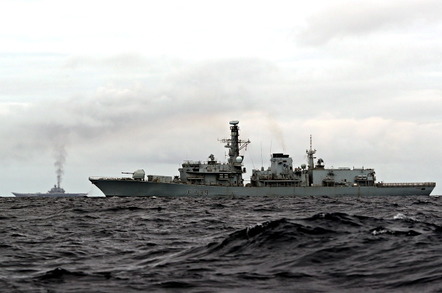 Type 23 frigates like this one will carry the new Sea Ceptor missile. Pic: Crown copyright

A Royal Navy frigate is to sail to the Far East while carrying the newly accepted Sea Ceptor anti-missile missile system.

Frigates in Royal Navy service are split between general purpose workhorses (can do everything from hosting cocktail parties to fighting pirates right up to proper war stuff) and dedicated submarine-hunting ships. The current Type 23 frigates are Cold War designs, and, while well maintained and constantly upgraded, are beginning to show their age. They will eventually be replaced by the Type 26 and the Type 31e, the former dedicated to escorting the new aircraft carriers and the latter intended for the workhorse duties.

The Mach 3 Sea Ceptor is designed to shoot down aerial threats, including jet aircraft, helicopters and other missiles. Developed by EU defence conglomerate MBDA, the £850m system is intended to protect Britain's two new Queen Elizabeth-class aircraft carriers – in particular, Queen Lizzie herself when that ship sails for the South China Sea in 2021. Like most modern missiles, the system is capable of engaging multiple targets at once.

When Montrose tested the Sea Ceptor, she "successfully intercepted a fast-moving drone target" said the MOD’s procurement arm. While initially eye-catching, for obvious reasons all targets for live missile exercises are remote controlled aircraft – i.e. drones. It's unlikely that the multimillion-pound missile was used to shoot down something like a quadcopter.

Sea Ceptor replaces the rather elderly Seawolf missile system, which was first introduced in the late 1970s in its first guise and was most notably used during the Falklands War. Seawolf's major shortcoming was that it was a line-of-sight system, restricting its practical range to around seven or eight nautical miles. In the scenario of an incoming supersonic missile, this left a very short time for Seawolf to launch and connect with its target.

When Britain's new Type 26 frigates start entering service towards the end of the next decade, Sea Ceptor will be fitted to them as well.

Defence secretary Williamson also announced this morning that an RN frigate or destroyer would be permanently assigned to the Persian Gulf from 2019 onwards.

As El Reg previously set out in a little depth, the Persian Gulf is vitally important to keeping the lights on at home thanks to its oil and gas exports to Britain.

While the UK currently has a standing deployment of minesweeping ships and a headquarters vessel in the Gulf, deploying a destroyer or frigate – a "proper warship" capable of fighting serious opposition – marks a deterioration in the international situation. ®