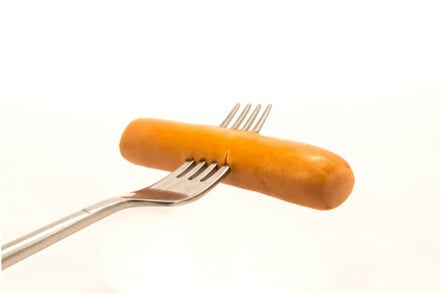 With a bank holiday looming (in the UK and US at least) thoughts are turning to barbecues and the traditional burning-of-the-meat.

However, retired Swiss engineer Gabriel Strebel (a man with way too much time on his hands) has put his skills to good use by devising a vaguely terrifying sausage spinner to avoid a blackened banger spoiling family festivities.

Cooks using the device are required to mount sausages onto a slowly rotating vertical disc, which sends the porcine produce through a sealed gas or electric-powered cooking chamber, before emerging festooned with perfectly cooked wursts.

“My grill does not produce any smoke,” the banger botherer told Swiss newspaper Le Matin before adding “it could be used in the bedroom!” showing romance is certainly not dead in Switzerland.

Able to burn (or rather, lightly brown) 200 sausages per hour (other produce can also be mounted on the wheel), the main buyers for the machine have been commercial rather than private with 120 sausage flingers sold so far. Strebel’s personal grilling record stands at 34 tons of meat over two days for the opening of the Gotthard railway tunnel.

With the vaguely horrifying stainless steel machine now in its fourth incarnation, the engineer continues to plan for the future. A future that will apparently feature skewers. What a time to be alive. ®