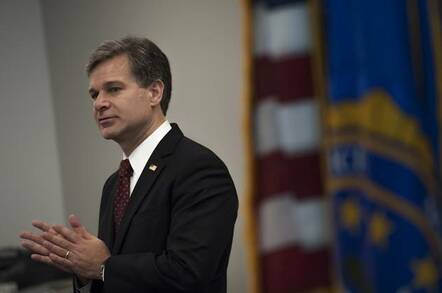 The FBI apparently gilded the lily in its long campaign against consumer cryptography, telling the world it held more locked phones than it did.

At issue is the Feds' claim that it has seized 7,000 phones it can't crack because they're encrypted.

FBI boss Christopher Wray upped the ante in December 2017, telling a Congressional budget hearing the FBI couldn't access the content of “approximately 7,800 mobile devices” in spite of having the legal authority to do so.

When we reported Wray's original statement in October 2017, it was in a speech to the International Association of Chiefs of Police. Wray said the FBI had the legal authority to break into the stockpiled smartmobes but couldn't, and that “impacts investigations across the board: narcotics, human trafficking, counterterrorism, counterintelligence, gangs, organised crime, child exploitation”.

However, the Washington Post is now reporting that number was “inflated”, and instead, the FBI only has between 1,000 and 2,000 phones.

WashPo said the error had been discovered about a month ago, and since then the FBI has been trying to get a more accurate count, and an audit could take weeks.

The agency gave the newspaper a statement blaming the error on “programming errors” that delivered “significant over-counting of the devices reported”.

It counted the phones in three separate databases, even though its methodology had been checked in April 2016.

The trimmed number hasn't dimmed the Feds' enthusiasm for the tech sector to come up with some kind of crypo-magic: it told WashPo it still wants a solution because “Going Dark remains a serious problem for the FBI, as well as other federal, state, local and international law enforcement partners.”

Perhaps it was the experts that counted phones for the Feds. ®