Goal to be achieved not with government cash, but 'market conditions' 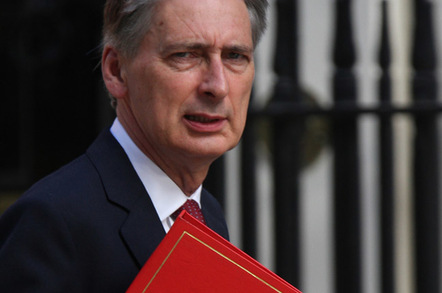 But rather than invest money in such a scheme, like other governments in Europe, the Chancellor of the Exchequer has devised something much, er, much better: "creating the conditions for the market to deliver".

In a speech at the Confederation of British Industry last night, Hammond said:

"If we are to achieve our ambition of a truly high-speed economy, and keep up with our competitors, then we need a step change in our approach.

"So I am now setting a new target to see full-fibre to the premises connections being available to 15 million premises, that’s the majority of homes and businesses, by 2025.

"This is ambitious.. and it will require industry to connect more than 2 million additional premises a year for the next seven years. We won’t do that by government diktat."

He said the Treasury "will use all the tools at the government’s disposal to ensure that target is met" and "we’ll go further, by committing to finish the job – and deliver a nationwide full-fibre to the premises network by 2033."

The Register asked the Treasury and the Department for Digital, Culture, Media and Sports for more information about what "market conditions" it plans to introduce, and if it has any investment and timeline plans for "finishing the job" by 2033 (assuming his government will still be around in 15 years).

Currently, just over one million premises in Britain receive full-fibre speeds, making it one of the lowest-ranking countries in Europe 1Gbps speed penetration.

Andrew Ferguson, editor of thinkbroadband.com, said on paper the 15 million figure looked achievable without government involvement, as many operators have already announced full-fibre targets. For example, Openreach has committed to connect three million premises to full fibre by 2020, with the potential to extend that to 10 million homes by 2025.

Meanwhile, Vodafone inked a deal with CityFibre to connect up to five million premises over the next eight years; and TalkTalk has said it wants to connect three million homes.

"Many operators keep re-announcing their full-fibre plans, but what we don't know at the moment is how much overlap there's going to be," said Ferguson.

He noted the plans to hit the figure by creating the right market conditions will mean different things to different providers. "For CityFibre its about the country having less reliance on Openreach, whereas for BT its about having market certainty [and not changing Ofcom regulations]." ®