Enough storage news to keep you going till beer o'clock 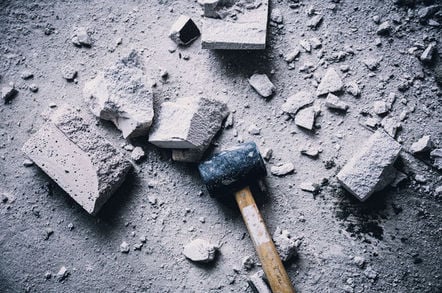 As ever, it has been a heavy storage week. Here's our curated collection of goodies, goings-on and glitches.

This now data security-focused and private equity-owned company has pushed out its Web Application Firewall as a service – WAFaaS.

Barracuda said it secures web applications by delivering enterprise-grade protection without the overhead of deploying and managing an appliance.

There is a spectrum of configuration options from zero-touch via Barracuda Vulnerability Remediation Service (BVRS) to policy customisation. Admins can find, automatically fix, and continuously monitor web application vulnerabilities, which we're told will make it easier for organisations to deploy web application security with minimal administrative overhead.

It said the advantage of running PostgreSQL on Datrium DVX with bare-metal servers is that you get the consistent performance for data-intensive workloads and the data management tooling that was missing with virtualization.

Datrium provides host performance locality for PostgreSQL which it said enables the database to operate and perform directly from local flash or NVMe devices on the servers, while offering three-way data protection with erasure coding.

Dell EMC has said its Unity storage array has reached $2bn in cumulative bookings since May 2016.

Total capacity sold is 2,200+PB with 22,400 arrays sold to 9,400+ customers. There have been around 12,000 downloads of the software-only Unity Virtual Storage Appliance.

Virtuora DX is a cloud service that is available in Japan. It uses Fujitsu's VPX(virtual private digital exchange) technology using blockchain to create data interchanges among companies without placing the data in external environments.

Fujitsu said Virtuora DX is a data distribution and utilisation service that accelerates co-creation between different industries by extending blockchain, which makes falsifying data essentially impossible, to safely and securely share and bring visibility to outline information about the data a company or organisation has via a portal site.

The data is registered with a consortium of participants who have come together to use shared data. Registration includes the data's ID and attribute information plus a data jacket. This holds outline data, such as descriptions of the content, and the methods used to collect it. The registered Data Jacket is shared within the consortium in a form in which connections among related data can be seen, as text mining is automatically performed on the content.

Fujitsu will add a function to allow companies to encrypt the data they have and securely send it to specified parties. It has set a sales target for Virtuora DX of cumulative sales to 5,000 companies by the end of fiscal 2020, as well as theformation of 500 consortiums.

HDID v6.5 sends file system backups to HCP in a native file or object format. The backup data can then be used by Hitachi Content Intelligence and Hitachi's Pentaho analytics software to provide compliance-related and search capabilities.

SSDs can lose data if they get too hot and also from excessive program-erase cycles. Innodisk says testing shows the data retention of standard MLC flash decreases 168-fold when moving from 40°C to 85°C. This means data that would normally last two years, will experience issues in only five days.

Innodisk says SSDs in heavy-writing environments are particularly at risk. It said its iRetention technology used smart firmware and an onboard sensor to constantly monitor temperatures. The firmware uses the P/E cycle number to calculate how often to refresh the data. This is all handled by the SSD itself and will self-adjust to changes in the environment.

In the K2.N architecture, customers can build storage arrays comprised of any number of c.nodes and m.nodes to deliver the exact level of performance and capacity efficiency needed for a workload. This moves on from traditional dual-controller architecture.

Flex composability software supports dynamic orchestration of K2.N resources including the creation of Virtual Private Arrays (VPAs) comprised of any number of c.nodes and m.nodes, and the ability to allocate resources from one VPA to another at the software layer, with no physical reconfiguration of resources.

DotN (.N)-capable features are generally available in v8 of VisionOS, Clarity and Flex. Kaminario's Composable data platform can be purchased as a pre-integrated appliance, K2 and K2.N, or as a software-only offering, Cloud Fabric.

Primary Data founder and CTO David Flynn has become the executive chairman of Hammerspace. It claims to offer hybrid cloud for the people – any cloud, any vendor and any data centre – which isn't a million miles away from Primary Data's Datasphere technology. Flynn describes it below.

Primary Data appeared to have shut down in January. Its website is now back online.

Quest Software, with more than 100,000 customers worldwide, has released NetVault Backup 12.0. It features:

Wieland Alge, general manager for EMEA at Barracuda, has left for family reasons, and become a co-founder and partner at MAD, which aims to develop innovative ideas in both startups and established businesses.

Brad Wolfe has been hired as CFO.by FalconStor Software. Current CFO Pat McClain will switch into a senior advisor role in continued support of the company's strategic plan.

Brad Cohen, a long-standing VP for corporate communications, has resigned from Quantum.

Mark Lewis, chairman and stand-in CEO of Violin Systems, has become the full-time CEO. President Ebrahim Abbasi has resigned to focus fully on his health problems. Lewis said: "We thank Ebrahim for all he has done for Violin and fully support him focusing on full recovery so that we can collaborate with him again. I look forward to carrying on the momentum that has been reignited here at Violin."

Storage software developer Falconstor reported revenues of $5m in its first fiscal 2018 quarter, ended 31 March, down 17 per cent on a year ago. There was a net loss of $500,000, up from the $1.1m reported a year ago. It said its finances had improved and it is working on product innovation and strategic growth.

Paid-for versions of Google's consumer Drive offering will be rebranded as Google One plans from June in the USA and have price cuts to compete better with Microsoft OneDrive and Dropbox.

Nutanix system-focused backup supplier HYCU has a partnership with Carahsoft Tech Corp to help expand HYCU's footprint in the public sector market. Carahsoft will be offering HYCU Data Protection for Nutanix to its own resell partners.

Quantum named AutonomouStuff LLC its primary partner for storage distribution in the automotive market, enabling it to deliver Quantum's storage products for both in-vehicle and data centre environments.

Synology announced its 6-bay DS1618+ NAS in the US. It comes with an Intel Atom C3538 CPU with memory upgradable to 32GB. Synology said it is good for tech enthusiasts, creative professionals and small to medium-sized businesses who are looking for more storage space and 10Gbit speed. The product is immediately for sale at $799.99.

DDN says Harvard University's Faculty of Arts and Sciences Research Computing (FASRC) has deployed DDN's GRIDScaler GS7KX parallel file system appliance with 1PB of storage. It is for the collection of images detailing synaptic connectivity in the brain's cerebral cortex. FASRC's legacy NAS system could not keep up.

Sphere3D's Overland Tandberg unit sold a just under $1m order for RDX QuikStor removable disk storage technology to an existing global hotel chain customer. It stores a daily backup of their video surveillance and reservations activity on the drives. ®

From frog to prince: How private equity may fish Barracuda from the industry's boiling pot

Barracuda's so solid crew: We got three more quarters to go