Senator Kennedy: Why I cast my Senate-busting vote for net neutrality

He's pro free market – but there isn't one among America's ISPs 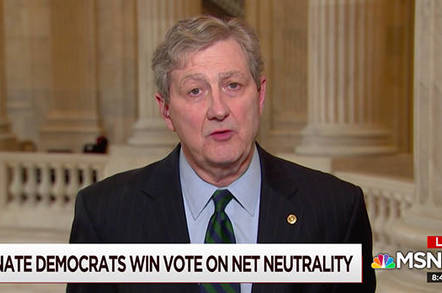 The shocking lack of choice and competition in America's ISP market is why Senator John Kennedy crossed the aisle and voted for a repeal of the FCC's efforts to end net neutrality rules last week.

Speaking on Morning Joe on Tuesday morning, the Republican senator from Louisiana explained his decision to go against the party line and vote for a "resolution of disapproval" under the Congressional Review Act (CRA).

He was one of three Republican senators to do so, joining Susan Collins (R-ME) and Lisa Murkowski (R-AK), and as a result the resolution was passed 52 votes to 47.

Remarkably, he then argued that "in principle, I agree with that" but there was one big problem: internet access is not a free market in the United States.

He noted that in his state of Louisiana, 23 per cent of citizens have the choice of just a single company to get broadband – as defined by the FCC's 25Mbps minimum download speed. And nationwide that number is 19 per cent. If you remove satellite access, he went on, half of all Americans only have one ISP that will give them decent internet access.

"Internet is a necessity: it's like water, it's like electricity it's like a telephone," Kennedy went on. "If an internet service provider jacks up the price, you can't switch. And many people can’t afford it."

That is an accurate summary of the dire state of competition in the United States, thanks in large part to what looks like persistent, long-term collusion between the main cable companies not to compete with one another in most markets in the US.

It is also a situation that the current FCC administration has been going out of its way to try to hide, even pushing to have the definition of broadband changed to a slower speed so that competition looks healthier than it really is. That effort failed following an outcry.

The FCC has the authority to force ISPs to provide broader services at higher speeds and under the previous chair, Tom Wheeler, the federal regulator was poised to do exactly that. However, when Ajit Pai took over as FCC chair one of the first things he did was to bury the 2017 Broadband Deployment Report and then try to change its methodology to paint a rosier picture than really exists.

When those efforts failed and the 2018 broadband report revealed the ongoing lack of competition in the United States, Pai and his fellow Republican commissioners adopted the Trumpian up-is-down approach by arguing that "advanced telecommunications capability is being deployed to all Americans in a reasonable and timely fashion."

That was despite the report stating clearly and statistically that the US has close to the slowest speeds among advanced economies while paying more than almost anyone else for those slower speeds.

In an effort to deflect criticism, Pai's staff inserted text at the final editing stages that criticized the policies of the FCC's previous leadership over its net neutrality rules and claimed that the current leadership had greatly improved things by "removing barriers to infrastructure investment, promoting competition, and restoring the longstanding bipartisan light-touch regulatory framework."

In other words, the FCC claimed that the dreadful results were the result of the previous administration and that its new policies would result in better results next year. It remains to be seen how the FCC explains away next year's report – assuming of course it fails to redefine broadband to present a false picture in the meantime.

But even though Senator Kennedy is willing to point at the lack of competition in broadband markets, it seems that he has bought into the new narrative being pushed by the telco industry and FCC: that the introduction of 5G mobile technology is the answer to US broadband woes, rather than pipes in the ground.

Currently, the FCC – and the White House – are pushing a raft of new measures that give telcos what they want in the expansion of 5G, including the ability to bypass local council regulations, and possibly a fixed rate on what organizations are allowed to charge for renting out their property to hold base stations.

Those efforts have proved controversial with one key group criticized for being stacked with industry reps. Its subsequent report and recommendations were slammed by the non-industry members of the committee as flawed and possibly illegal.

But, egged on by telcos, Congress have bought into the line that there is a "global race" for 5G and so it needs to do everything in its power to smooth the introduction of the technology, including killing off any restrictions and lowering the cost of its introduction, in order to keep America competitive.

Senator Kennedy is seemingly persuaded that mobile technology and 5G will be the answer to the US' internet problems, rather than fixed line broadband.

He closed out his interview by arguing that "in five or 10 years from now when we've got 5G, when we have a true, free competitive market I'll agree with the cable companies but right now I just don't."

The truth is that the US continues to suffer from an endemic lack of competition that has led directly to slower speeds and higher cost of internet access. And the main body with authority to force change – the FCC – has gone out of its way to ignore that reality.

The FCC is also working on behalf of those same companies to reduce the cost of next-generation mobile networks, effectively condemning the country to a slow, expensive internet for the foreseeable future. At the same time, it is also working to effectively subsidize the cost of new networks while those companies continue to make billions of dollars in revenue and profits from over-charged consumers.

In full Trumpian 2018 style, FCC chair Ajit Pai is currently on a tour of rural America claiming the complete opposite: that he is working tirelessly to bring fast internet to everyone. We shall see if he's right, but wouldn't bet on it. ®