It's the first time GANs might actually be used in production 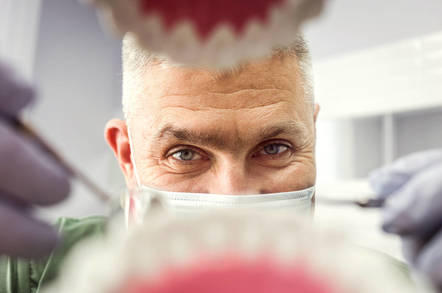 Artificially intelligent software has found the next industry to potentially, as the kids say, disrupt – dentistry.

A team of researchers from the University of California, Berkeley and Glidewell Dental Lab have built a generative adversarial network (GAN) to automatically generate new designs of dental crowns.

GANs have been pretty trendy since 2014. There are hundreds of various acronyms for different GAN models like ABC-GAN, CatGAN, DiscoGAN, MAD-GAN, S2GAN, and so and so forth.

Although interesting none of them have really had any practical applications, until now. It's a bit of fun to see fake faces morphing into one another, or watch horses turn into zebras, but its not all that useful.

But the new model proposed in a recent paper might actually be used by dentists for real patients one day.

Next, the opposite side of the jaw, whether that be the lower or upper jaw, is also scanned. The GAN learns the distance of the gap where the missing tooth is and fills it in with a new crown design in 3D. The way current design means that it can only deal with single missing teeth.

The GAN model is based on the popular pix2pix system, another GAN model that generates a corresponding output image based on any given input. It spawned the popular edges2cats model, where a GAN fills in the blanks of a computer drawing with an image of a cat. But instead of cats here, you get teeth.

"We've developed a proprietary process that generates high quality, naturally looking dental restorations utilizing GANs. To the best of our knowledge, we are the first to bring this technology to the physical realm of manufacturing.

The tooth model was trained on 1,500 pairs of images of both jaws with and without the missing tooth, another 1,570 pairs of scans were used for validation, and that left 243 for testing.

Hurrah! GANs can actually be useful

Designing fake teeth is no menial task. Professional dentists rely on CAD programs that come up with a basic design based on a catalog of predetermined templates, and then they tweak these models to fit the patient’s mouth. A good fake tooth must also help the patient chew and be aesthetically pleasing.

“The ideal crowns should not penetrate into the opposing teeth in the 3D model while maintaining few contact points to tear and crush food,” the paper said. The AI designs have been compared with the ones produced by human technicians and apparently exceed them by producing more details on the surface of the tooth to fit more grooves in for biting and chewing.

Glidewell Dental Labs are now exploring how it can be used in production. Azernikov told El Reg that the GAN has been internally tested on real teeth, and the company is currently working on clinical validation with a small group of local doctors in Southern California.

“With our latest technology, the doctor is expected to obtain more accurate and consistent results, which ultimately means better outcomes for the patient," he said.

“I believe that AI will soon have a very profound effect on dental practice in many different ways. It will shorten the time doctors need to spend on routine tasks and effectively allow them to see more patients.” ®

Something for the Weekend, Sir? The inevitable return of Norbert Spankmonkey

Apple: The exclusive sales channel for an, er, AI toothbrush

Bleedin' obvious as the nose on your face

You're more likely to get a job if you study 'social' sciences, say fuzzy-studies profs

Opinion It's OK! No need to work hard at university after all!