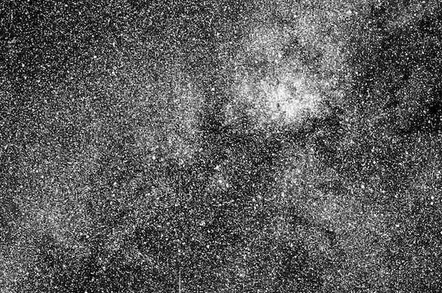 200,000-plus stars snapped by the Transiting Exoplanet Survey Satellite

TESS is headed for an orbit that’s elliptical and inclined to Earth. The ellipse allows TESS to squirt data back to Earth from its 108,000km perigee, an altitude that keeps it well clear of the cluttered ~30,000km orbit inhabited by geosynchronous satellites. At its 373,000km apogee it’ll be well clear of the Van Allen Radiation belts.

The inclination makes the orbit stable by reducing back-and-forth tugs of gravity from Earth and the Moon. The resulting orbit is stable enough that TESS won’t need to adjust its orbit, so can carry less fuel which means more payload for instruments.

To get into that orbit, TESS needs a gravity-assist from the Moon, which is why it passed within 8.000km of the lunar surface last week.

NASA’s engineers have also been testing TESS’ cameras, with an early result being the shot above that depicts the output of just one of four cameras, and just 1/400th of the sky that TESS can survey, but still shows more than 200,000 stars from around the constellation Centaurus. The full image is here.

TESS will soon have company out near the Moon, as China plans to today launch a relay satellite, named “Queqiao”, to beam back information from the Chang'e-4 lunar probe it plans to land on Luna’s far side later this year. ®