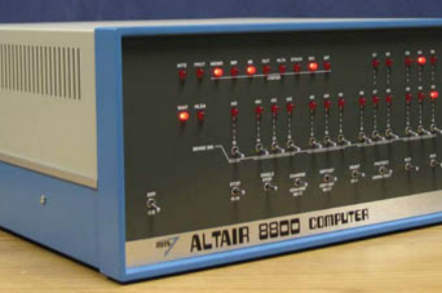 Hidden away among the interminably long keynote speeches at Microsoft's recent Build event was a project to delight the retro enthusiast.

Observing that "Microsoft is all about backwards-compatibility", Mike Hall and the Azure Sphere bunch demonstrated how far they could take that theme by sticking one of Redmond's IoT development boards into an Altair 8800 case and bringing up a version of Bill Gates and Paul Allen's original BASIC on it.

The development board, based on the MediaTek MT3620, was hooked up to a SparkFun TMP102 temperature sensor.

An Intel 8080 emulator running atop Microsoft's take on a Linux OS allowed the team to fire up Redmond's first take at a commercial BASIC.

The SAVE command, familiar to anyone used to hitting Play and Record at the same time before crossing their fingers and issuing a prayer to the gods of magnetic media, was also tweaked by the team. Instead of a cassette tape, the BASIC application wrote to Azure, where the temperature data could then be plotted in Microsoft's IoT Central.

Microsoft's involvement with the Altair 8800 began in 1975, when the three-man software company licensed its take on BASIC to MITS, the maker of the Altair.

In a situation not dissimilar to today, enthusiasts keen to use Microsoft's code on the machine found themselves needing to upgrade the memory of the computer from the 1K supplied to a mighty 4K or beyond just to get the thing to work.

As well as a delightful throwback to a time before multi-gigabyte codebases, the demonstration underlines Microsoft's seriousness in its bid to get a foothold in the expanding IoT market. Although development boards aren't due to ship until the end of September, according to IoT hardware supplier Seeed, the company's intent to have devices based on the tech shipping by the end of the year will be challenging.

The Register has dropped Microsoft a line to find out more, including the all-important question of if some unfortunate PFY had to enter the code an opcode at a time by flipping switches on the front of the case. ®