Want to know what an organisation is really like? Visit the restroom

You can learn a lot about a biz from its bogs 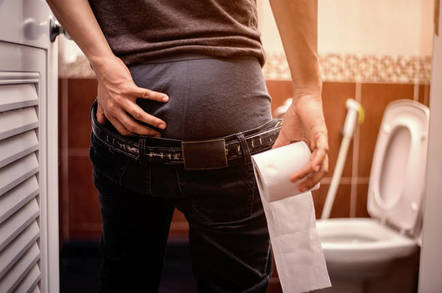 Something for the Weekend, Sir? I like to hang out in company toilets.

That's not to say I linger long after the shake-off – I'm no washroom loiterer – but I do enjoy the visit. It's because I am curious.

As an itinerant freelancer, my work takes me to a variety of tech-savvy business premises. And while small companies each have their own style of office layout, every larger organisation from mid-size to corporate looks almost exactly the same as another.

Except for the toilets. You can learn a lot about a business by its bogs.

So as I turn up for an on-site booking and sit for a short while in a reception space that has been arranged identically to those depicted in every business furniture catalogue ever printed, later to stride through yet another open-plan office of the same old rows of grey desks and the same old blue carpet tiles, I am overwhelmed by the tedium of déjà vu.

So on arriving at the designated meeting room – always featuring a frosted glass wall, a boardroom-style table with a faux teak effect surface and luxury adjustable chairs that refuse to be adjusted unless you violently bounce up and down on them like an over-excited child on a Space Hopper – I drop my things in the corner furthest from the door and enquire about using the washroom facilities.

As I am given verbal directions for the nearest toilet, I make a cursory check under the table which has been designed for up to 20 persons and confirm, yes, there are just TWO power sockets, as per usual, and no extension cable of any description. A quick glance behind the massively undersized TV at the end of the room reveals another six wall sockets that are, as I confidently expected, all occupied by plugs already – one for the TV and the other five for various components of the impossibly complicated video conferencing system that no one knows how to use, least of all the IT department that had lobbied strongly against its purchase in the first place.

So far, so identical. Now let's find out what this place is really like.

I follow the much-worn path to the washroom trod by many thousands before me, just another pagan pilgrim carefully counting his steps until that glorious moment of transcendental relief upon paying his respects at the Holy Temple of Excreta.

It's only in the toilet that I can establish a mental fix on which particular office I have visited that day. Large organisations do not necessarily offer generous facilities, nor small ones the most modest. As we say in the Society of Habitual Itinerant Technician Toilet Evaluation Reporters, size is no indication of quality.

Let's not dwell on the poor examples as that would be in bad taste. Suffice to say I'd rather perform my ablutions in a hole in the ground than in a gold-plated palace if the former was the one with a topped-up soap dispenser.

But allow me to observe that right now I have just stepped into the most marvellous client crapper I have ever experienced. It is a tiny two-cubicle Gents, but marble-clad with baroque details. The consumables include not just soap but a choice of two types of the stuff (clear and opaque), plus three alternatives of hand cream, soft tissues, face wipes and lavender-infused linen towels to be disposed of in a rustic wicker basket under a sink big enough for me to climb into. The lights are dimmed. The seats are warm. New age muzak performs a gentle soundtrack to mask your body's involuntary sound effects. I half expected to see a whispering, waistcoated gentleman by the door offering to scent me with a range of aftershaves on my way out.

Utterly fabulous. What a terrific place to work, rest and play. And shit.

Also highly revealing about a workplace is the signage displayed in office restrooms. Wherever I go, no matter how posh the surroundings, workers appear to need wall-mounted directives printed in large font sizes on how to use – or rather, how not to misuse – the facilities.

This has always struck me as odd because my own loos at home are notable for their lack of written instructions. I can only assume I am exceptional in this respect. It was explained to me when I was very small how one should act in a toilet and the details have stayed with me ever since, thanks in part to frequent dress rehearsals and countless performances.

But no, in the workplace toilet, the walls are invariably covered in behavioural imperatives and hygienic cautions. Who knew that you had to flush after dumping? Or that a washbasin tap might need turning off? Or not to attempt to dispose of improbable items down the pan such as "towels"? Maybe they should put up lists of other household goods you shouldn't expect to flush away to the sewers without trouble, such as sofa cushions, footwear or children over six. I'm also minded to agree with the boss at my first ever place of employment, who could occasionally be found limping up or down the stairwell grimacing through clenched teeth that stealing toilet rolls should be a sackable offence.

Unlike this particular unfortunate, I return from the grunting rooms this day refreshed and with a spring in my step. My face smarts invigoratingly with aftershave and creamy odours waft from my gesticulating soft palms – vanilla from the left, coconut from the right.

Back in the meeting room, I am soon brought back to Earth and my surroundings merge into the amorphous generic semblance of every other office building in the western world.

A large cupboard that does not match the rest of the furniture has been installed in the most awkward place to squeeze past; it is locked but almost certainly contains nothing but a layer of dust, a torn corner from a Post-It note and a single paperclip. The aircon has just two settings: Arctic or Sahara. Everyone is forced to use a Guest Wi-Fi login whose permissions have been devised by a recent graduate of a free Cyber Security MOOC to prevent access to personal emails, cloud drives and the internet in general. A ceiling light flickers every two minutes. Halfway into the meeting, the room begins to vibrate to the intense scream of a workman's drill on the other side of a wall, and continues for the next six hours.

I could be anywhere.

Alistair Dabbs is a freelance technology tart, juggling tech journalism, training and digital publishing. He is intrigued how workplace toilet signage is always affixed to the walls and doors using Blu Tack at a distinctly jarring 3° off the perpendicular. Even more intriguing is that even after he adjusts the angle of each notice, they will have returned to their sloping angle by the very next day. He wonders whether toilet signs slope to the opposite side in the southern hemisphere.

Something for the Weekend, Sir? Shadow IT casts its darkness over us all

Best thing about a smart toilet? You can take your mobile in without polluting it

Something for the Weekend, Sir? It really makes you sit and think, doesn't it?

Those IT gadget freebies you picked up this year? They make AWFUL Christmas presents

Something for the Weekend, Sir? Cyber Monday is coming but I still feel so green

Connect at mine free Wi-Fi! I would knew what I is do! I is cafe boss!

Something for the Weekend, Sir? There's no security on holiday when you're a bellend

Something for the Weekend, Sir? Pay me $500 in Bitcoin or... oh look, everyone's dead