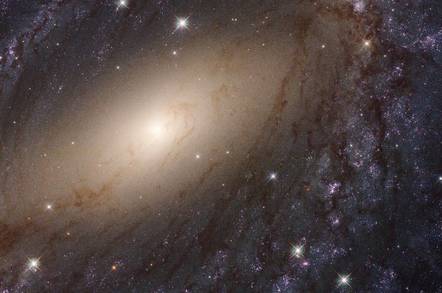 Galaxy NGC 6744, about 30 million light-years away, from the LEGUS survey. Image credit : NASA, ESA, and the LEGUS team

The project nicknamed LEGUS (Legacy ExtraGalactic UV Survey) captures a whopping 39 million hot blue stars and about 8,000 star clusters within a 60 million light year radius around Earth. The stars range from one to several billions years old, and are bunched together in groups ten times more massive than the largest ones seen in our Milky Way galaxy.

The team chose these galaxies from more than 500 candidates based on their sizes, mass, star formation rate, and metallicity - the abundance of elements heavier than hydrogen and helium.

"There has never before been a star cluster and a stellar catalog that included observations in ultraviolet light," said Daniela Calzetti, an astronomy professor at the University of Massachusetts Amherst leading the survey, said.

"Ultraviolet light is a major tracer of the youngest and hottest star populations, which astronomers need to derive the ages of stars and get a complete stellar history. The synergy of the two catalogs combined offers an unprecedented potential for understanding star formation," she explained. 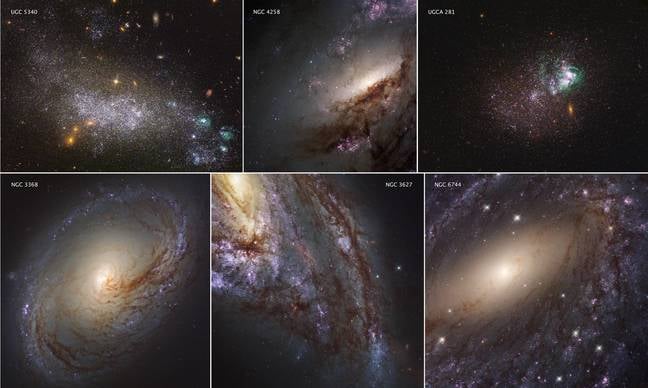 Six galaxies from the LEGUS survey in a mixture of UV and visible light. Image credit: NASA/ESA/LEGUS team

The Wide Field Camera 3 and the Advanced Camera on Hubble were used to snap UV and visible pictures of the galaxies over a year. The scientists are hoping that they will reveal secrets into how the stars formation is impacted by its environment.

“When we look at a spiral galaxy, we usually don't just see a random distribution of stars," It's a very orderly structure, whether it's spiral arms or rings, and that's particularly true with the youngest stellar populations. On the other hand, there are multiple competing theories to connect the individual stars in individual star clusters to these ordered structures," Calzetti said..

"By seeing galaxies in very fine detail - the star clusters - while also showing the connection to the larger structures, we are trying to identify the physical parameters underlying this ordering of stellar populations within galaxies. Getting the final link between gas and star formation is key for understanding galaxy evolution."

The results from the LEGUS survey will also come in handy when NASA launches the James Webb Space Telescope in 2020. It operates at longer wavelengths at orange and red visible light through to infra-red, so it can detect the glow of younger stars hidden and still swaddled in a cloak of gas and dust.

"Much of the light we get from the universe comes from stars, and yet we still don't understand many aspects of how stars form,"said Elena Sabbi, a researcher at the the Space Telescope Science Institute also working on the LEGUS survey. "This is even key to our existence -- we know life wouldn't be here if we didn't have a star around." ®

Love T-shirts, but can't be bothered to wash them? We've seen just the thing!

Seagate eyes UltraViolet for cloud pie in the sky