Neat bit of kit, and all the UK needs now is the cash to (re)buy it 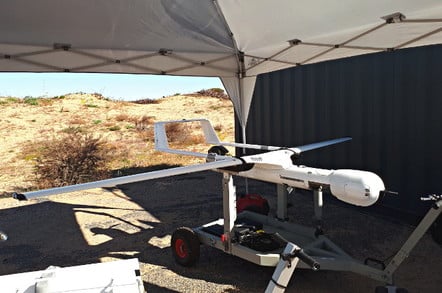 Pics The Register was among the first news outlets to get a close-up look at Insitu's new Scaneagle 3 aerial surveillance drone during its first public demo at a naval test range in Spain.

The Scaneagle will be known to British readers as the successful unmanned aircraft used by the Royal Navy right up until the UK ran out of money to keep it in service, having signed a fixed-term Urgent Operational Requirement contract.

At Insitu's Onward event at the CEDEA test range near Mazagón, on the Andalusian coast, El Reg had a shufti at the second Scaneagle 3 prototype, which was on its third demo flight – the two previous were restricted to potential customers only.

Compared to the previous model, the Scaneagle 3 carries up to 20lb (9kg) of sensor gear rather than 7.5lbs, as a company engineer told us. This means it can carry two separate payloads, as Insitu describes the electro-optical sensor packages that can be fitted to the aircraft.

The firm was also keen to stress that the Scaneagle 3 is ITAR-free, meaning it can be sold to commercial customers without needing to go through the painful process of obtaining a US military tech export licence. Previous versions were not ITAR-free, though as they were primarily acquired by military users that was less of a concern.

The airframe weighs in at 80lb (36kg) fully loaded, with the rear-mounted pusher engine generating 170W of electrical power for the sensors and radios, including an encrypted video downlink. 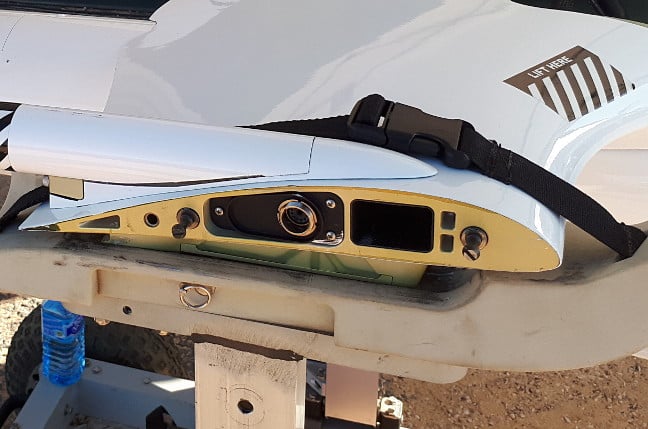 Like all of Insitu's UAVs, the Scaneagle is launched into the air thanks to a pneumatic catapult running at 2,220psi and fitted with a launcher carriage. The drone meets the air at around 52 knots. 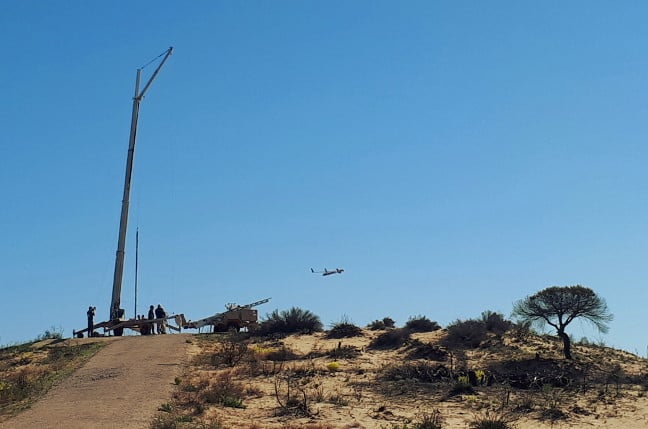 A Scaneagle 2 is flung into the sky by Insitu's Mk.4 launcher

Insitu craft are recovered from the air by the simple process of commanding them to fly at a rope suspended from a crane-type contraption fitted with a hydraulic damper system; the aircraft’s swept wings are both fitted with titanium carabiners at their tips that grip the rope tightly, suspending the Scaneagle in mid-air until the ground crew lower it. An onboard accelerometer senses the violent yaw when the wing is caught by the rope (the aircraft cartwheels sideways when it hits) and cuts the engine. The process was described as “very dynamic” by Insitu personnel, an assessment El Reg agreed with. 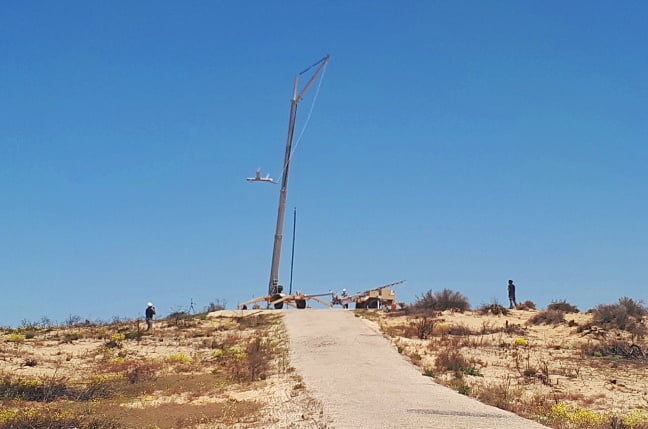 The moment an Insitu Scaneagle 2 is captured by the Skyhook. Note the white rope and the position of the aircraft as it begins to yaw, cutting its engine as it does so

The unmanned aircraft flies itself autonomously, to the point where it returns back to its Skyhook (Insitu’s trade name for the crane-rope capture affair) using differential GPS with the ground beacon being placed under the rope. All human involvement is limited to pressing the required buttons to start the landing sequence and getting the UAV off the rope afterwards. Though the craft can be flown on barometric altitude (as manned aircraft typically use), it is launched and recovered on GPS altitude. We were told that the UAV is programmed to approach the rope at a height of 33 feet with a two-foot lateral offset to increase the chances of a wing meeting the rope rather than the nose. 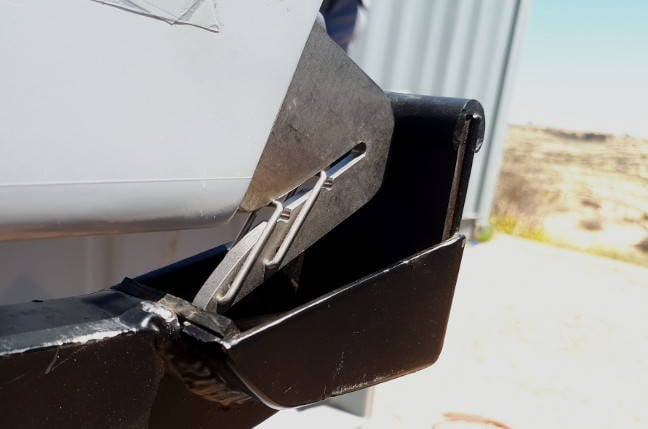 A close-up of the titanium rope capture 'carabiner' on the Insitu Integrator's wingtip. This grabs the rope when the UAV is commanded to fly home

Although the weather in Spain during the demos we attended was gin clear, the Scaneagle can be recovered in crosswinds of 10-15kn with a deviation of 15 degrees either side of the ideal approach course. The Skyhook trailer, which must be levelled to within half a degree, is as straightforward to reposition as you’d imagine.

The Scaneagle 3's wing assembly can be moved back and forth to keep the aircraft's centre of gravity within limits as different payloads are attached; a calculator backed up by a manual check balance tells the operators exactly where to attach the wing. Rather cleverly, the onboard software then detects which position the wing has actually been bolted to and refuses to play ball if it's in the wrong place relative to the calculations. 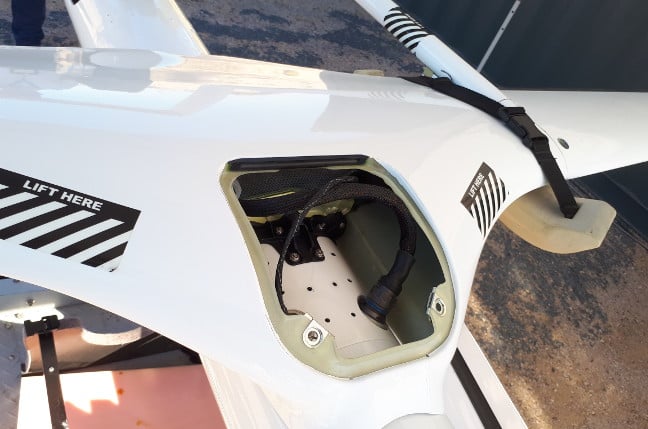 The interior of the Scaneagle 3 centre section. Note the multiple positions for the attaching bolts

The underlying tech in Scaneagle is mature, having been in operation for more than a decade. As the company is a Boeing subsidiary, it uses aviation-style gauges and displays on the operator's screen; airliner-style ticker tapes to show speed and height, and EICAS-style digital gauges for the drone's engine.

As a piece of autonomous kit, the Scaneagle is rather good at what it does, with an Insitu corporate advisor, retired US Coast Guard Vice Admiral John Currier, claiming a surveillance capability of 1,000 square miles per flight hour. Whether or not it can do that under real-world conditions, it doesn't need a runway – one of the factors making it attractive to the USCG and the Royal Navy.

The sensor gear that can be fitted to the Scaneagle is what you'd expect; precision imaging payloads such as Sentient Vision Systems' Vidar electro-optical product. The Vidar consists of a high-def video camera that films in a 180° arc. The Insitu software picks up items of interest covered by the camera, flagging these up to the operator, who can then click on them to cue the main camera or sensor mounted in the Scaneagle's nose turret for a close-up. We were told that machine learning is used to help the Insitu suite cope with varying light and sea states, as well as for classifying the various items seen (is it a fishing buoy, a person in the water, a submarine periscope, etc).

Vidar operates autonomously, meaning it detects and presents items of interest without human intervention, presenting the operator with a photo-reel type clickable display. We were shown a demo of a life raft and a dummy in the sea, both of which were duly detected and zoomed in on with surprising detail; from a height of a couple of thousand feet or so the imaging gear was able to pick up individual limbs moving on the dummy. However, in response to audience questions, an Insitu rep did confirm that so far their software is unable to update positioning of vessels on time-separated sweeps; the scenario asked about was what happens to plotted vessels on the map after a sweep interval of 20 minutes. The answer was that the operator has to manually update, and thus deconflict, the presented picture. 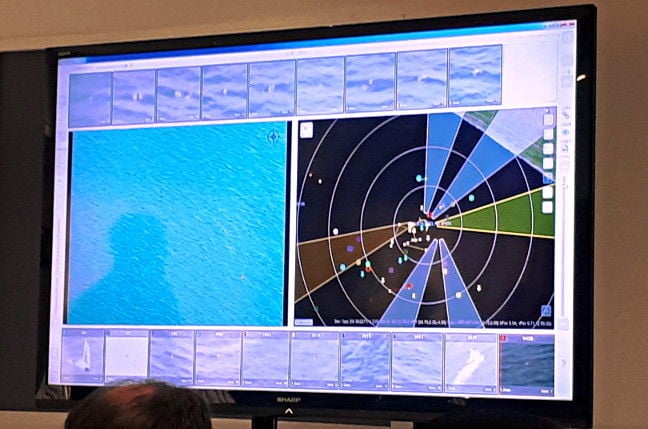 The display of visual data captured from Insitu unmanned aircraft, as seen during a presentation

From the British perspective, The Register understands that while the UK effectively can't afford it for now, Scaneagle remains very much of interest to the British Armed Forces, as was shown by the UK military delegation's presence in Spain for the event, comprising Army, Navy and MoD personnel.

John Damush, Insitu's chief growth officer, was fairly bullish about the UK taking Scaneagle back on, telling the assembled press over lunch that "the customer was ecstatic. They'd have it on every one of these ships. The problem is the budget priorities took them in a different direction."

Whether it scrapes through the MoD's £20bn budget black hole is another question, however. ®