Defence secretary compares them to... WW2 Lancasters. Just a sec there, Gav 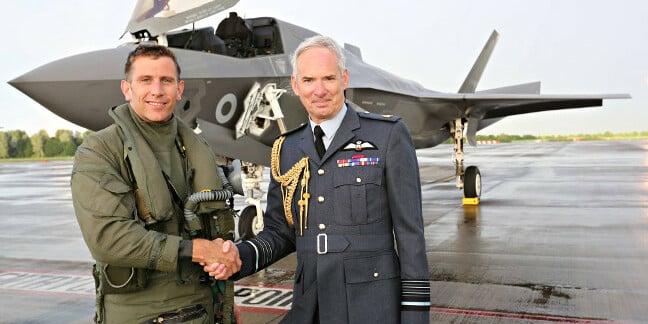 We can expect a repeat of this photoshoot, which featured the first UK-owned F-35B ever to visit Britain in 2016. Pic: Crown copyright

Britain's first permanently based F-35B fighter jets are due to arrive in our green and pleasant land in June.

The news nugget was delivered by defence secretary Gavin Williamson, who informed world+dog that the supersonic stealth jets will arrive at RAF Marham in Norfolk in a few weeks.

The announcement was timed for the 75th anniversary of the famous Dams Raid of the Second World War, which took place over the night of 16-17 May 1943. 617 Squadron RAF bombed dams in Germany's industrial Ruhr heartland.

Starved of hydro-electric power, Germany's biggest arms factories took a measurable knock in production. Thousands of German personnel were promptly redeployed to sit around the dams manning flak guns instead of being on the Eastern Front fighting against Russia, at the time a British ally. Instead the German troops were left gazing at the skies in case the RAF came back to have another go.

617 Sqn has been reformed to fly the F-35, becoming one of a number of RAF and RN units that will do so. Currently the squadron is training in America with its new jets, of which the UK currently has 15 on charge. Deliveries to the British Armed Forces are deliberately slow until the Americans have frozen the design and started full-rate production, with Britain hoping not to have to spend millions on upgrades and paying over the odds for early-stage machines.

"Just like those Lancasters which played such a vital role in the Second World War, the F-35B Lightning is based on great British design, operating with futuristic technology to adapt to an increasingly dangerous world," said Williamson in the inevitable canned quote.

This is a bit of a stretch, to put it politely. The Avro Lancaster was an all-British design, with the possible exception on moral grounds of the Mk.III's Packard Merlin engines that were built in America to the British blueprints, albeit with some light production engineering tweaks – and, naturally, the defensive armament of US-designed Browning machine guns.

Moreover, the "futuristic technology" that the defence secretary would have us compare the F-35B to consisted of a wooden triangle with two pegs in (the bomb sight for the Dams Raid) and converging spotlights fitted under the wings so the pilot could see when he was at precisely 60 feet, the release height for the famous bouncing bomb used to demolish the dams. Indeed, the bouncing bomb itself was dreamt up by British engineering genius Sir Barnes Wallis, who came up with the idea to ensure that the barrel-shaped weapon would skip along the water's surface and then roll itself down the wall of the dam before exploding at the right depth. Conventional bombs were unable to reliably stay in contact with the wall before exploding.

Wallis devised the bouncing principle by watching children skim stones off the surface of a pond. It was ingenious but miles from being high-tech. One suspects the ambitious politician was a little too keen to get a soundbite out without doing some due diligence, though El Reg is naturally delighted to be able to help him out.

The F-35B, in contrast to the venerable old Lanc, is an all-American design, though Britain has been permitted to build parts of the airframe in return for buying 138 of the complete product. Most of the operational procedures for the F-35B, which is the short takeoff and vertical landing variant, are derived from British R&D work, however.

As we revealed in our in-depth chat with British F-35B test pilot Andy Edgell earlier this year, the level of automation in the F-35 is so great that the aircraft is capable of going from full forward flight to hovering and landing with the touch of two buttons. This is a far cry from the very basic and occasionally faulty autopilot in wartime Lancasters, which 617 Sqn's commander, Guy Gibson, was particularly scathing about in his book. ®

Wing Commander Guy Gibson, 617's first commanding officer and the man who led the Dams Raid, captured the events in his seminal wartime book Enemy Coast Ahead. Though written under wartime censorship and therefore a little light on detail, it is an excellent read.

Paul Brickhill's post-war volume, The Dam Busters, gives the full operational history of 617 Sqn from formation to Dams Raid and the war's end, including the unit's exploits with the Tallboy and Grand Slam mega-bombs, with the latter weighing in at a hefty 22,000lbs (10,000kg). The unit's Lancasters had to be fitted with uprated engines, along with having any unnecessary weight stripped out, in order to carry the Grand Slam – with the items removed including the defensive mid-upper gun turret.

Having been formed of hand-picked crews for the Dams Raid, 617 Sqn has retained its legendary status in the RAF as an elite unit. It was equipped with Tornado ground attack jets until a couple of years ago when it was disbanded.