Vows customers will have constant online access, no downtime 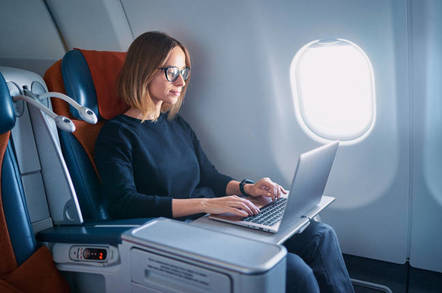 Analysis This month Dell EMC introduced a new technology and rebranded VMAX array called PowerMax. It's more than a software upgrade, though, meaning that you may need to replace a VMAX with a PowerMax array.

Those who choose to upgrade have to swap out their old storage hardware due to an array architecture change – as occurred with EMC's XtremIO all-flash array a couple of years ago. Dell EMC has claimed its "non-disruptive migration*" (NDM) facility will mitigate disruption for people using the kit.

We asked Dell EMC what was actually involved and, yes, hardware must be exchanged, but data is copied over. It also claimed customers have and will not have to deal with any downtime.

The process is pretty similar from the users' point of view in both cases. We'll look at the first option to show what's involved.

Each sequence needs to be kicked off by the VMAX admin but then runs in an automated fashion. The migration takes place at the Storage Group (PDF) level.

In the environment setup initiation the migration environment is checked. It confirms that both the source and target arrays can support the NDM operations, that there is an SRDF replication pathway for data migration. All the storage groups in the source array are then migrated within this environment.

The next phase (create) involves looking at a specific application's storage on the source array and then having the same storage automatically provisioned on the target PowerMax. Target array devices – HBAs etc. – are assigned the identity of the source devices and are configured in a pass-through mode allowing data to be accessed from both the source and target devices.

Accessing hosts gave multi-path software. The storage admin tells the hosts to rescan the paths to its storage and so find the paths to the devices created in the target PowerMax. The NDM system ensures that all I/Os that are directed to the target by the host from then on are actually serviced by the source array until the cutover. 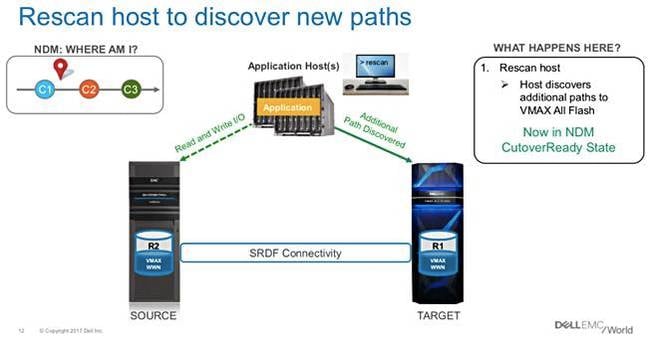 Once a storage group has been fully created in the target and paths to it from the hosts have been discovered, a cutover operation is run.

When the data synchronisation is finished, all the application's data has been replicated to the target PowerMax. The next step is the commit operation, which:

The finishing phase is a clean-up, and takes place after all the storage groups have been migrated. The VMAX to PowerMax connectivity, configured for the data migration pathway, is removed along with other infrastructure on both arrays that was configured by the array OS to support the migrations.

During migration the source array is doing extra work; non-disruptive does not always equal no impact. So:

If you are already using SRDF to have a second VMAX function as a DR site then the NDM process can accommodate that and set up similar functionality with the PowerMax.

All in all this is not so much rip-and-replace as changing a jet airplane engine in mid-flight without the passengers noticing much at all. ®

* Get a PDF version of information about NDM here.