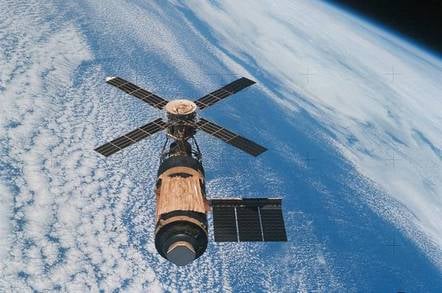 Two NASA anniversaries rolled around this week, but you would be forgiven for missing them. The first was the 45th anniversary of the launch of the United States' only solo Space Station, Skylab, designed to host astronauts for months at a time.

The second big day, yesterday, marked 55 years since the space agency launched the final crewed mission of the Mercury programme, which allowed the US to get its first taste of trips into space lasting more than a few hours.

On 14 May 1973, the last Saturn V launched the US's first, and only, space station: Skylab. Along with the Apollo-Soyuz link-up a few years later, Skylab represented the last vestiges of NASA's Apollo programme and the last gasp of the Apollo Applications Program (AAP), designed to make use of capabilities developed at vast expense over the previous decade.

A fine mist of astro-pee had short-circuited the electronics one by one...

David Shayler's book, Skylab, details the trials the space station went through to get to the launchpad. Originally planned to be based on the second stage of a Saturn V, engineers proposed converting the emptied fuel tank into living space once in orbit, known as the "wet workshop" concept.

However, as budgets shrank and the Saturn V production line was closed down, engineers turned to a less complicated "dry workshop", which would remove the need for space-walking astronauts to perform acts of derring-do while assembling the thing. Instead, the station would be based on the S-IV stage and launched, fully outfitted, into orbit. Smaller than planned, but less risky.

Once in orbit, Skylab was planned to host crews launched on smaller Saturn 1B rockets in Apollo capsules. The first crew was due to lift off the day after Skylab launched for a 28-day outfitting mission, effectively doubling the US spaceflight endurance record at the time. Unfortunately, things went awry for Skylab soon after the last Saturn V lifted it into the skies above Florida.

Just 63 seconds into the flight, the station's micro-meteoroid shield prematurely deployed and was ripped off by the aerodynamic forces of the launch. This, in turn, had a mechanical effect on the deployment mechanism of the solar arrays, resulting in one being torn off at 593 seconds by the retro-rocket exhaust of the second stage and the other failing to open as planned.

With little power in orbit and no protection from the Sun, the station soon began to heat up, threatening scientific equipment on board and making access by a crew difficult.

NASA teams scrambled to save the crippled station, eventually devising a parasol that could be deployed from Skylab's scientific airlock to deal with the heat problem. Data analysis showed that one of the solar arrays was likely still in place, but held down by the remains of the shield. If a spacewalking astronaut could cut away the debris, the array would deploy and the power be at least partially restored.

Eleven days after Skylab's launch, the first crew – consisting of astronauts Pete Conrad, Joe Kerwin and Paul Weitz – lifted off on a mission to save the stricken station. Conrad's biography, Rocketman, describes the challenges the occasionally sweary astronaut faced, firstly in docking with the recalcitrant space craft, which required depressurising the Apollo command module in order to deal with faulty latches, and then in freeing the stuck solar panel.

The latter task nearly sent Conrad and Kerwin tumbling into space as the massive solar wing suddenly sprang open while the spacewalkers were wrestling with the debris.

Skylab went on to host a further two missions. The last crew set an endurance record of 84 days as well as causing controversy by failing to report an astronaut's illness to Mission Control (while forgetting that an on-board tape recorder was running). The astronauts also staged what has been often reported as a "mutiny" in space, but was in reality no more than an exhausted crew requesting a break from 16-hour work days.

A further mission to the space station was considered, as was a second Skylab (which can now be seen in the National Air and Space Museum in Washington), before the Space Shuttle programme took priority and budgets and delays prevented any more visitations. 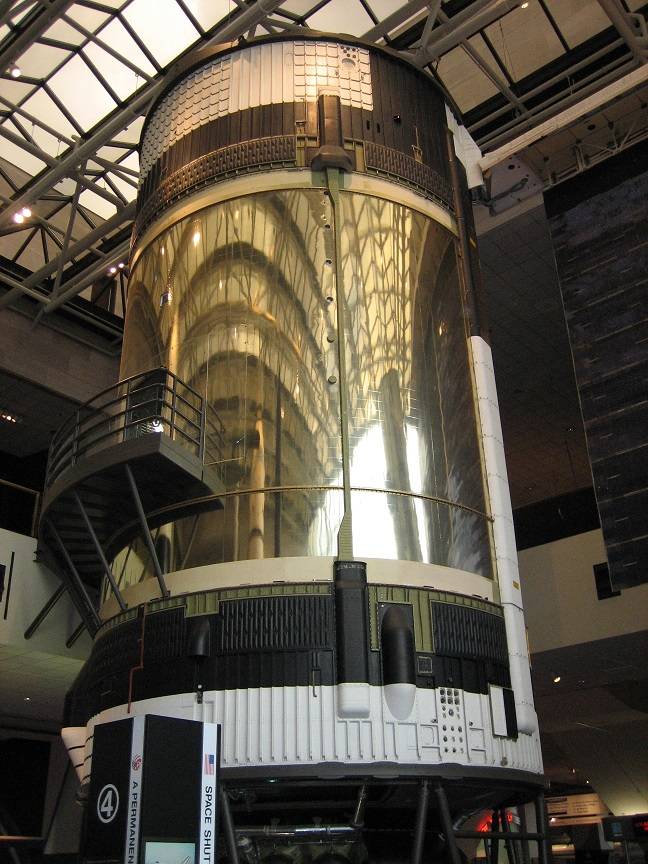 Skylab B at the National Air and Space Museum (pic: Richard Speed)

Skylab B in Washington is worth a visit, if only to peer inside and get a feel for the size of the space station, which had enough internal pressurised space to allow a free-flying test of a jet pack. The modules of the International Space Station (sized for the Shuttle's payload bay) seem very cramped in comparison.

Skylab eventually re-entered on 11 July 1979 and spread itself over a large section of Australia.

Fifty-five years ago today, NASA launched the final crewed mission of the Mercury programme, which began in 1958 with the aim of getting an astronaut to space and back, ideally before the Soviet Union.

While the programme succeeded at the former goal, it failed spectacularly at the second. Alan Shepard was lobbed on a suborbital flight shortly after Yuri Gagarin had orbited the earth. That failure, however, led to the US becoming caught up in a race to the Moon, which would culminate in Armstrong setting foot on the lunar surface eight years later.

With the longest flight up to now being Wally Schirra's nine hours aboard Mercury-Atlas (MA) 8, NASA officials were keen to stretch their systems for a full day, and also perhaps regain a little lost pride. By this time the Soviet Union was habitually placing cosmonauts into orbit for well over 24 hours.

Chief astronaut at the time, Deke Slayton, explains in the book Deke!, that the Mercury capsule had only been designed to last three orbits. NASA managed to eke out six orbits with Schirra's MA-8 (aka Sigma 7), but the 20 or so orbits planned for Cooper and MA-9 (aka Faith 7) required 183 modifications to the tiny Mercury spacecraft.

One space and weight-saving idea was to remove the astronaut's couch and suspend the unfortunate pilot in a net. Unsurprisingly NASA's astronaut corps was not keen and the concept was quietly shelved. However, by careful weight-saving, the team were able to make all the required changes while only adding an extra three pounds of mass. 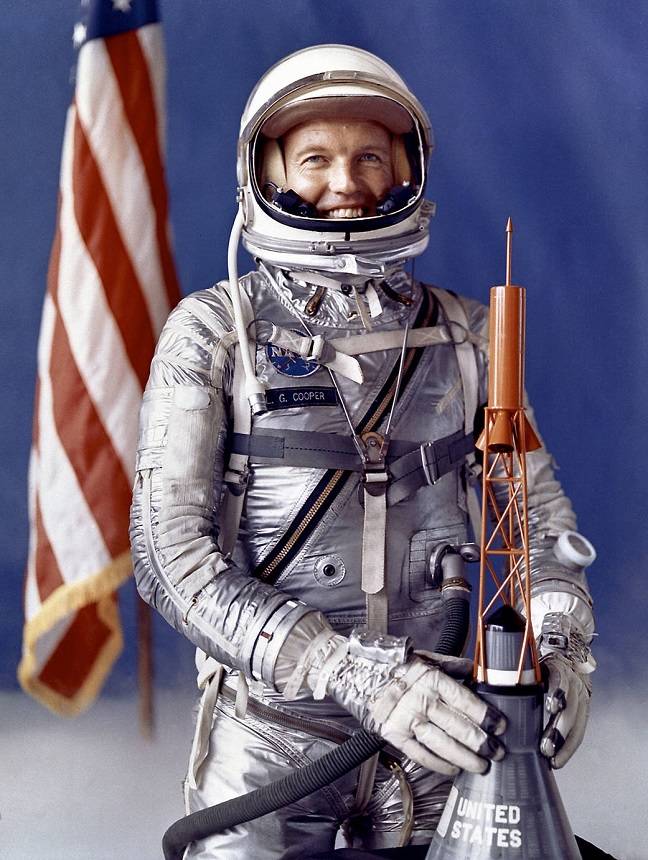 After a day's delay to correct a radar problem, a very relaxed Gordon Cooper (who had managed to doze off in the capsule during countdown) was launched into orbit. NASA's first flight director, Chris Kraft, writes in his book Flight that other than a few minor niggles, such as a bulky temperature control on his suit, Cooper's first 18 orbits went without a hitch.

The astronaut caused some controversy by claiming to be able to see railroad tracks and smoke-trails from orbit, something thought to be impossible. It took until a later Gemini flight to prove Cooper right.

As the mission neared its end, things began to go awry. First, parts the automated re-entry system failed, meaning Cooper would need to perform some of the functions manually. Then the entire system malfunctioned, which resulted in the astronaut facing the prospect of flying the whole of the re-entry by hand.

When parts of the environmental system in the capsule began failing, Mission Control rushed to bring the spacecraft back to the earth. In a memorable exchange, Cooper observed, "Things are starting to stack up a little," before listing all the failed systems and concluding brightly: "Other than that, everything's fine."

Cooper executed a perfect re-entry sequence and splashed down 6.44km (4 miles) away from the carrier USS Kearsarge.

Engineers later found the cause of the failures. One of the innovations for Cooper's mission was a urine collection system, which had leaked. A fine mist of astro-pee had short-circuited the electronics one by one.

Lessons learned in the importance of sealing circuits from moisture would later prove invaluable in the frozen command module of the Apollo 13 mission. ®