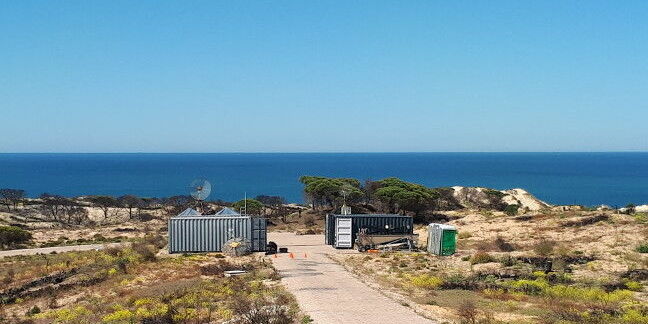 Balancing military and civilian standards for data-crunching and software development for surveillance drones is an interesting challenge, according to unmanned aircraft company Insitu.

Insitu's main products are its unmanned aerial vehicles, which include the Scaneagle and the Integrator. In conceptual terms these are semi-autonomous aeroplanes that are directed by ground-based operators from a fixed location, and are equipped with cameras and similar imaging payloads.

Josh Beavers, one of Insitu's product managers, told The Register a bit about the firm's Icom C2 control suite, used to fly its aircraft and manage the onboard cameras. He said: "The approach has been more about the task at hand as well as flying the aircraft. We try to optimise all the workflow and user experience for the task that has to be done, rather than how to manually stick-fly."

The Icom suite draws on commercial practice, Beavers said, with users able to pick and choose plugins depending on their needs – he gave an example of an airspace management plugin that alerts the operator if the drone is about to fly outside of its permitted area.

"Open architecture: absolutely," said Beavers. "You've got all these international customers that are helping coalitions. It's better to be open, better for business, better for capabilities. This has been at the beginning of Icom C2 development. Quite a few years ago they had the SDK mentality; it enables us to go after specific customer desires without having to change the fundamental programme… or for special programmes that we’re not allowed to participate on. Everything we're building has an SDK associated with it.

"We have multiple vendors who use those open tools and libraries... I think what it does for us, that exposure of reselling our libraries and systems, it helps us improve their product, get their feedback and challenges."

Insitu's Catalina and Tacitview products allow third-party devs to "operate on media from a variety of sources, be it cameras, network streams, archives, and beyond," according to the company website.

Graeme Harvey, Insitu's integration and delivery manager, chipped in: "As hardware improves, that increases the ability to do things that we've always wanted to do, [such as] augmented reality, VR. Now we can actually do it in real time because the hardware is architected to do that."

This is all fairly routine stuff for the software development world but in military circles, open architecture is a relatively recent thing, following many years of vendor lock-in and "open" standards developed around a dominant market player's particular product set and preferences. While Insitu has been commercially minded from its beginnings in the 1990s, with its earliest craft being built for surveying oceanic fisheries, its experience of military standards, which are put together over years, differs a little from the fast-moving commercial world.

45-day drone flights? You are like a little baby. How about a full YEAR?

"It's something that Insitu has been reasonably diligent in, trying to be compatible with those standards. One of the challenges we see is you have these commercial off-the-shelf manufacturers," said Harvey. "They're developing their own standard, if you want to put it that way."

"I think one of the fun things in commercial markets is that we have a lot of defence experience with remote sensing, we can leverage those standards and systems," added Beavers. "The defence community, to share data and all that, it took them a while to build up that expertise, to help facilitate that discussion or bring up requirements they might not have been aware of."

"You're at a much faster tempo," said Harvey, "you can just reach out and buy capabilities. Just buy the software you need to manipulate that data. With an API you can integrate it into your core architecture. That's the advantage of operating in the commercial space where you have that freedom of manoeuvre."

Yet not all of these multiplying standards bring downsides, in Insitu's view. Harvey gave the example of a NATO standardisation agreement (STANAG 4609) for video, "which is based on professional broadcasting standards, it's quite a good example of defence leveraging commercial capability, that's really important in terms of interoperability."