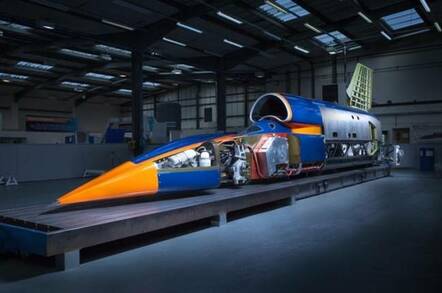 The team behind the Bloodhound Super-Sonic Car (SSC) announced plans today to take a crack at the 1,228kmph (763mph) land-speed record at the end of 2019.

It has been a tricky few months for the plucky Brit outfit.

Two major suppliers, including URT Carbon Fibre, have gone into receivership and left the car missing some fairly important components, such as inner wheel arches.

Despite this setback, the team reckons it will secure the funding and support to complete Bloodhound SSC thanks to the involvement of a "major third party".

While remaining coy about the details, the engineers now plan to resume development of the mono-propellant rocket that will send Wing Commander Andy Green to a 1,609kmph (1,000mph) land speed record.

While no further runs are planned at Newquay Airport, engineering work on the rocket motor itself will continue at Newquay Aero Hub from August. Bloodhound SSC itself remains safely tucked away in Bristol.

In May 2019, the team, led by CEO Richard Noble, will fly the completed car to Northern Cape, South Africa where seasonal flooding will have left the desert surface ideally suited for the first high speed runs (referred to as "BH500".)

In a change of plans, Bloodhound SSC will then remain in South Africa and aim to take a run at the record in October or November 2019.

Bloodhound SSC has little in the way of competition, with US challenger North American Eagle mostly quiet since 2016 and the team behind the Aussie Invader 5R avoiding a costly clash with the Australian Tax Office in 2017 with the car 75 per cent complete.

The Register looks forward to the peaceful idyll of the Cornish countryside being once again torn asunder by some very antisocial rocket noises. ®