Oculus Go: Capable kit, if the warnings don't put you off 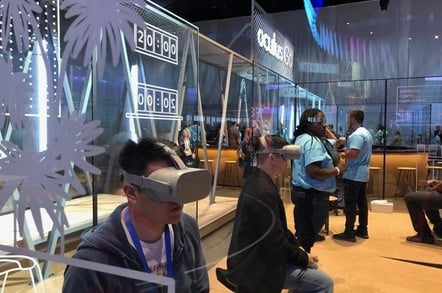 Review Earlier this month, I jotted down some initial impressions about the Oculus Go virtual reality headset I received at Facebook's F8 developer conference.

Last weekend, I had a chance to play around with it more thoroughly and to test it on unsuspecting family members. What follows is a more considered account of the face-hugging screen.

Viewed simply as a piece of VR hardware, the Oculus Go is reasonably priced and capable of providing a path into VR without additional hardware. Available in 23 countries from oculus.com and various retailers around the world, it starts at US$199 (32GB) and for US$249 you can have the 64GB model.

You could strap your Android phone into Google Cardboard (US$15) or Daydream View (US$99) and press it to your forehead, but a hundred dollars more for a standalone headset is fair enough.

The Oculus Go, based on a Qualcomm Snapdragon 821 processor, comes with a single controller (for interacting with on-screen menus and objects), a lanyard, a spacer for those who wear glasses, a charging cable, an AA battery (for the controller), and a lens cloth.

The headset's integrated battery lasts an estimated 1.5 to 2 hours for gaming or 2 to 2.5 hours for video content.

I didn't last that long – after 30 minutes of continuous, not particularly comfortable use, I was ready for a break. Recharging (the battery) takes about 3 hours.

A single controller is not really ideal. It's easy to use, which is a plus. For what's essentially a VR starter kit, it's adequate to convey a sense of the possibilities. But it limits the range of interactions compared to what's possible with two controllers. It's like having one arm tied behind your back, or more accurately, not there at all.

Various Go titles model directional movement, but taking steps in the real world – which is discouraged due to the potential for colliding with things – has no bearing on in-game position or perspective.

Oculus touts the visual clarity and integrated spatial audio of its device. I found the visuals to be adequate but not particularly impressive compared to playing a high-framerate PC game on a capable monitor.

The spatial audio, however, does add to the sense of immersion. And the built in mic helps.

If you're exerting yourself enough to sweat or it's just hot where you are, the screen can fog up. And as previously noted, I found the fit to be slightly off, which allowed some light in from below.

For those dying to test the VR waters, the Go is a capable vessel.

The hardware, however, really ought to be considered in the context of the accompanying content and the medium of VR itself.

The Oculus Go comes with access to a store of free and paid content including over 1,000 games, videos and experiences – the vague word for audiovisual content that doesn't quite fit into traditional categories of narrative entertainment.

Oculus sometimes refers to these as "exciting experiences" but that's not always the right adjective. Alternatives like "nausea-inducing," "confusing" or "annoying" might well apply.

"Experiences" is a problematic term because there's no set of standard expectations by which an experience can be judged. Where movies can be measured by established norms, VR remains novel enough that experiences can diverge wildly.

For many people, novelty is enough to justify VR.

My 15-year-old daughter, was thrilled by the device and her first foray into VR. "It smells like a new car," she observed, adding "It's heavy."

At just over a pound (468g), the Oculus Go is comparable in heft to the Oculus Rift and the HTC Vive. The weight is nonetheless noticeable, particularly if you're moving your head.

For maybe 30 minutes, the newness of the experience kept her enthralled.

"Whoa! You'll never believe how cool this is!" she gushed while looking at 360 degree images. "I want to have this in my room and go to sleep with it. It's so pretty!"

As a point of comparison, a photo of a puppy will elicit an even more effusive response.

Later, once I'd helped her launch Combat Coaster, a game in which you ride a roller coaster and shoot at targets, she remarked, "This is the weirdest thing ever. I'm moving forward but not really moving."

And once she figured out how to use the controller to shoot: "This is so cool! I'm so bad at this. I'm the worst shot ever!"

My significant other, a musician and tech gear skeptic, spent a bit of time watching Netflix's Stranger Things using the Go headset. "The resolution is not great," she observed. She's definitely not a fan and found the VR experience unpleasant.

I fall somewhere in between. I can appreciate that it's possible to have compelling VR, but I find that anything less than full immersion – along the lines of Disneyland's Soarin' Around The World or Star Tours – comes up short or brings up lunch.

The Go's Epic Roller Coaster landed in the latter camp for me: It made me motion sick.

If you read the multiple pages of product safety documentation in the Go manual, you won't be surprised. Industrial solvents have shorter warning labels.

The Oculus Go is not for children under 13. About 1 in 4,000 people can expect to be vulnerable to device-induced seizures, according to the documentation. Serious injuries due to falls are a possibility, so users are urged to remain seated while using the device. Other risks include repetitive stress injuries (from mashing the controller button) and battery fires (thanks, lithium ion batteries).

Wait. It gets better.

"Just as with the symptoms people can experience after they disembark a cruise ship, symptoms of virtual reality exposure can persist and become more apparent hours after use."

So Go users are advised not to drive, operate machinery, or engage in other visually or physically demanding activities for hours after removing their headsets.

Adverse reactions like this aren't common, but they're something to consider. I can recall insomnia following prolonged Quake III and Call of Duty sessions on a PC, so it wouldn't surprise me if some of the more intense Oculus titles produced similar reactions.

Given the physical risks, I might as well play Paintball – which for the uninitiated involves running around in the woods getting shot at with airguns initially designed for marking cattle with plastic-coated balls filled with paint.

When I tried Combat Coaster for the Go, the experience was enough to keep my attention. I just found the game to be uninspired. I have no desire to play it again.

Not bad, but early days yet

My major objection to VR is similar to my objection to 3D in movies: Adding a dimension doesn't necessarily make the experience better or improve the quality of the narrative.

Take Combat Coaster as an example. The game involves riding along an undulating track and shooting at targets. Because you can turn your head in this VR space, you can shoot at targets you've passed that would be out of frame when looking forward. But it's not really any different from a 3D game that models a 360 degree environment. And it's still a game built around a tediously simplistic aiming mechanics.

Worse still, the entire Oculus ecosystem hooks into Facebook. You're encouraged to sign in, connect to friends, and to make the experience social. More data, less privacy. Facebook execs have become fond of framing VR as a social medium. It is just the opposite. It's a man-in-the-middle attack on your relationship with the world.

The Oculus Go is a worthwhile curiosity. If you're predisposed to VR, the headset is likely to intrigue and to invite speculation about what deeper immersion, with two hand controllers, a 360 degree treadmill, and haptic support, might be like.

If you're neutral about VR, the device should help you understand the parameters of an acquired taste. Maybe it will convince you to delve further. But once the novelty has worn off, you may find yourself drawn back to more familiar, less demanding forms of entertainment.

And if you're skeptical about VR but nonetheless decided to see what all the fuss is about, the Go will make you glad you didn't splurge on more capable kit.

VR in its current form remains a work-in-progress that needs to evolve beyond the awkwardness and limitations of its hardware: In the days that followed her initial Oculus Go experience, my effusive 15-year-old never expressed any interest in returning to the virtual world. No wonder Facebook got out of the VR content production business. ®