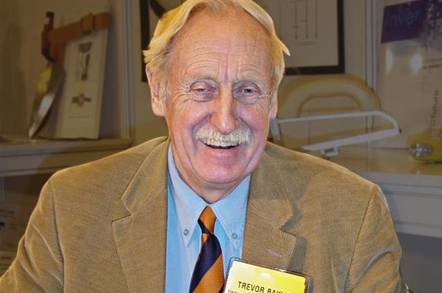 The late Trevor Baylis, inventor of the wind-up radio and veteran fighter for the intellectual property rights of designers, spent three decades defending his IP and demanding the UK government do more to protect small businesses from the blatant, rampant copyright theft that then existed.

Baylis died in the London suburb of Twickenham in March, having won fame and modest fortune from his radio.

British companies and inventors have historically suffered from predations in a range of fields: big compact disc-copying factories, pharmaceutical counterfeiting, and online and digital content.

It's also not unknown for those who've developed ideas and taken them to potential partners and customers to walk away empty handed, with the partner or customer proceeding to implement all or part of their idea without them, reaping the benefit and the potential income. In the high-tech sphere, the UK has a terrible history of failing to protect the IP of key technological breakthroughs.

DNA fingerprinting was devised in 1984 by geneticist Sir Alec Jeffreys at Leicester University.

Back then, the wording of those original patents when filed was not comprehensive enough to deter infringers – many of which were the world's biggest pharma and telecoms companies who didn't care about Sir Alec's IP. I interviewed Sir Alec's assistant at Leicester University in 1994, and was told the “total annual fees from the patents were just £10,000 – i.e. almost nothing.”

Jeffreys donates the current trickle from his patent revenues* to the Lister Institute in London – the medical research charity that funded his research for a 10-year period back in the 1980s.

While many companies have successfully commercialised DNA fingerprinting, patent loopholes meant the millions in licence revenue that should have gone to Jeffreys and his science never came.

Europe-wide, medical technology has largest number of patent applications, according to the European Patents Office (warning, Excel docs on the download page), followed by digital communication and computer technology. This is a rich field to mine: overall, sectors within life sciences saw global growth last year, with biotechnology and pharmaceuticals increasing by 14.5 per cent and 8.1 per cent respectively.

Made something worth protecting? What to do next...

Tim Moss, CEO and comptroller general of the UK's Intellectual Property Office (IPO), told the UK The Reg: "Design-intensive UK businesses generate more than 11 per cent of the country's gross domestic product. It's also estimated that the total investment in intangible assets protected by design rights is more than £14bn."

So what can you do?

The UK passed the Intellectual Property Act in 2014, making it a criminal offence to infringe on patents. Criminal sanctions were introduced to prevent blatant copying of UK registered designs in the course of business. It also brought in cheaper options for appeals from decisions of the UK IPO on registered designs, and the provision of a UK IPO opinions service on designs, to supplement the existing service relating to patents.

But before you get to the criminal phase, Christopher Burnett – chartered patent attorney at AA Thornton – advises you take out basic IP protection. This doesn't need to be difficult, or expensive. "Trademarks and design rights are the cheapest form of IP," he told The Reg. Fees are modest – for a registered community design it's €350 and for a community trademark €850.

Burnett said it is also easy to innocently and inadvertently copy an existing design. "First, make sure you're not copying anyone else's work. Certainly, when it comes to branding, it's worth clearing trade marks," he said. "If your business is affected, write 'cease and desist' letters. If your goods are counterfeited in the UK, call UK Customs and have them seized."

If you have a concept, idea or know-how you want to guard, start with a non-disclosure agreement (NDA), but do everything you can to keep it from reaching the public domain or the NDA may prove worthless.

Software companies have a new weapon, thanks to the EU. There is potential to protect the software via the EU Trade Secrets Directive, although the UK government must implement it into UK law by 9 June 2018. AA Thornton, litigation partner Geoff Hussey, has written an article on the directive here.

Another option open to SMEs eager to protect their IP is the Intellectual Property Enterprise Court (IPEC). Started in 2013, it covers claims of up to £500,000 and provides a mechanism for streamlined procedures. It places a £50,000 cap on the amount of costs recoverable from the losing side – encouraging a level playing field between multinational and corporate mouse.

The boys in blue have also woken up to the needs of IP holders. One unit at City of London Police is the Police Intellectual Property Crime Unit (PIPCU), which started in 2013 to especially target organised gangs. To date it claims to have "investigated IP crime worth more than £100m concerning counterfeit goods or digital piracy, and suspended more than 30,000 websites selling them".

Its recent Operation Creative tackled bogus streaming websites that drain revenue from legal sites. Cutting advertising on illegal sites is one of the key aims of the project, as it is one of the main generators of criminal profits.

Specialist software firm whiteBULLET, which identifies and monitors IP infringing websites, says these police initiatives have resulted in a fall in those revenues.

The wind-up radio failed to earn Bayliss the millions he deserved, but unlike Bayliss you have more options. You just need to know what they are – and to act on them. ®