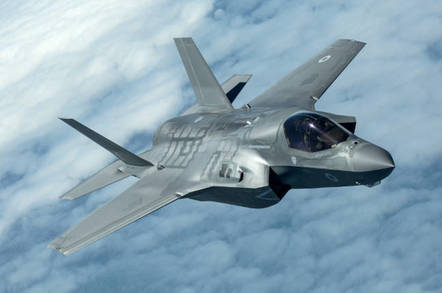 The UK has publicly said it will buy 138 F-35s from Lockheed Martin. Pic: Crown copyright

F-35 maker Lockheed Martin’s UK chief has breezily dismissed the idea of Britain cutting the number of jets it is buying from the US firm.

Speaking to the Press Association, Peter Ruddock said he was “respectful” of the Ministry of Defence’s financial situation, which happens to include a whopping great big black hole to the tune of £21bn.

But he didn’t believe the MoD would reduce its planned F-35 order, on the grounds that without the full order, Britain’s two new Queen Elizabeth-class aircraft carriers would be left in a sticky situation.

“I think what we have seen in terms of the analysis that we are privy to, is that when the MoD has looked at what capabilities they need in the future, the F-35 rates very highly on that list,” Ruddock, a retired RAF air marshal who is now chief exec of Lockheed Martin UK, told the PA.

Central to the carriers’ concept of operations (the big master plan that’s supposed to make them worth their joint £6.5bn price tag) is the idea that they will carry a squadron’s worth of F-35B fighters when deployed. The supersonic stealth jets are the only modern fixed-wing fighting aircraft capable of flying from the carriers; without them, there are no other fighter jets at present that can do the job.

Though the carriers’ vast hangars and acres of deck space provide a more than adequate helicopter operating base, it is the fighter jets that put them above the abilities of ships such as ex-HMS Ocean, the recently decommissioned Royal Navy helicopter carrier. Without the jets, or with a reduced number of them aboard, the main point of the carriers is much reduced, particularly in a war-like situation.

The MoD has publicly committed to buying 138 F-35Bs, of which the first 48 should be bought, paid for and delivered by the year 2025. Currently the UK owns 15, all of which are being flight tested in America. This autumn HMS Queen Elizabeth, the first of the UK’s two new carriers, will sail across the Atlantic for flight trials with the F-35s. The first fixed-wing landing is scheduled to take place in late September with a Royal Navy pilot at the controls. ®