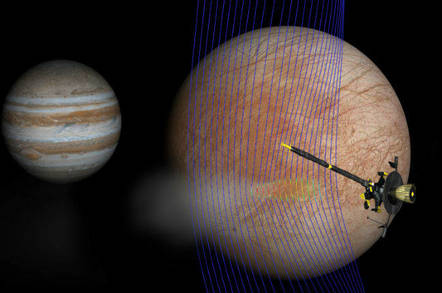 Space scientists have just figured out that an unusual anomaly from over 20 years ago was the equivalent of a space probe being squirted in the face.

Back in 1997 the Galileo Jupiter probe skimmed the watery moon of Europa and now it appears it got a faceful from a water plume 1,000km (621 miles) wide.

Flying at 6km (3.7 miles) a second Galileo made its closest ever flyby, shooting across the surface at an altitude of 200km (125 miles) when it detected something strange. The magnetic detectors recorded a kink in the magnetic field and the on-board plasma wave spectrometer picked up increased levels of ionised particles.

At the time, and with only a single data point, the findings didn’t mean much. But in 2008 NASA's Cassini spacecraft swung by the Saturnian moon of Enceladus and intentionally flew through one of the plumes of matter than the body periodically emits to examine what it contained.

Then in 2012 the Hubble Space Telescope spotted what looked like plumes of material being ejected from Europa’s southern polar region. The location of the plumes was close to where Galileo took its readings.

But it wasn’t until last year, at a conference for boffins planning the Europa Clipper spacecraft that’s due to head out to the mysterious moon in 2022, that Xianzhe Jia, a space physicist at the University of Michigan put the pieces together and decided to revisit the Galileo data.

In a paper in the journal Nature Astronomy Jia describes how his team build custom 3D modelling code to work out a plume’s density and properties, adding in the magnetic data from the Enceladus plume probe. After some serious number crunching, of the type that wouldn’t have been possible in the 1997 Pentium days, the results came back and look very positive.

“There now seem to be too many lines of evidence to dismiss plumes at Europa," said Robert Pappalardo, Europa Clipper project scientist at NASA’s Jet Propulsion Laboratory (JPL) in Pasadena. “This result makes the plumes seem to be much more real and, for me, is a tipping point. These are no longer uncertain blips on a faraway image."

All these worlds are yours, except Europa

Europa is one of the most talked-about bodies in the Solar System, not only because it was so integral to Arthur C Clarke’s classic 2001 series, and the new data is already being put into action.

The moon, smaller than our own, is covered with a layer of cracked ice that covers a vast underground sea. Scientists think this, and the heat provided by the constant gravitational kneading of Europa’s core by Jupiter and its other moons, makes Europa a prime candidate for life, albeit on a microbial scale.

To find out more the Europa Clipper mission will make over 40 close flybys of the moon’s surface, some only tens of kilometers up. With the new data this southern hotspot is going to be getting much closer examination.

“Using the probe we can detect particles, use the mass spectrometer to tell what the atmosphere is made of and sample its very tenuous atmosphere,” Elizabeth Turtle, research scientist at Johns Hopkins Applied Physics Laboratory said in a press conference on Monday. “We can even collect dust particles.”

The plumes will offer a vital insight into the waters below the crust of Europa. It may be that the region is either geologically active or the surface ice is thin or even broken, and this would allow plumes to erupt. Jia said there was too little data to speculate at the moment, but that more research is being done.

NASA originally wanted to use the Clipper mission to land a probe on Europa for direct sampling, and one idea was for a robot melt its way down through the ice and into the waters below, but budget cuts put paid to that.

Now, with a little luck, it seems like NASA might get some more direct data on the sea itself, thanks to the moon shooting up samples into space. ®