One small step for Musk, one giant leap for Bangladesh 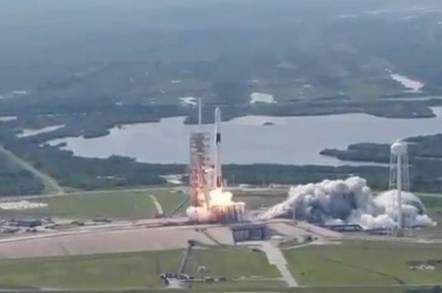 The satellite, named Bangabandhu Satellite-1, lifted off at 1614 EDT (2014 UTC) from the Kennedy Space Center in Florida, USA. The bird detached from the second rocket stage, and is now maneuvering into geostationary orbit around Earth, where it will handle internet communications and television broadcasting for Bangladesh's main telco.

As for the rocket's first stage, SpaceX managed to land its rocket on its autonomous barge Of Course I Still Love You 340 nautical miles offshore in the Atlantic. This is SpaceX's 25th successful first stage recovery – 11 on land and 14 on the drone ship – and the booster will now be taken back for inspection and refurbishment to be launched again.

That last part – the refurbishment – is going to be key, because the rocket is the first of SpaceX's Block 5 models to fly. The Block 5 is designed to be used at least 10 times with only minimal refurbishment. SpaceX claims the new design means a rocket can be checked and ready to fly again within 24 hours if necessary, and a new rocket can be built from scratch in 14 days.

The improvements made to the Block 5 rocket over previous SpaceX rocket designs include better heat shielding for the engines, a power increase from 176,000 to 190,000lb of thrust, faster fueling times and improved landing legs. The Octaweb – the framework that holds the engines in place within the rocket – is now bolted together rather than welded for easier assembly and checking.

SpaceX boss Elon Musk said Block 5 will be the last major upgrade to the Falcon series, and any changes in future will be incidental and minor. Then again, the notoriously fickle chap has also said he wants to begin retrieving the second stage of the Falcon, which would entail some major design changes in the future.

The main thrust of development will now be focused on the BFR – or Big, er, Falcon Rocket – which the Musketeers hope will take mankind to the Moon and Mars. The Falcon Heavy, which first flew in February, uses three Falcon rockets strapped together with a few small modifications.

TIL SpaceX puts its Falcon 9 User Guide – yeah, the rocket – online for anyone to read https://t.co/t3Gbao5kmp

Think about that next time you have to talk to a sales rep to get a system-on-chip's programmer's manual pic.twitter.com/c99fGJXhcQ

Musk has said that he would like the BFR to fly next year, which seems wildly optimistic. Instead, as is usual with SpaceX's attitude to deadlines, you should probably not expect to see one until 2021, or maybe a little earlier. ®