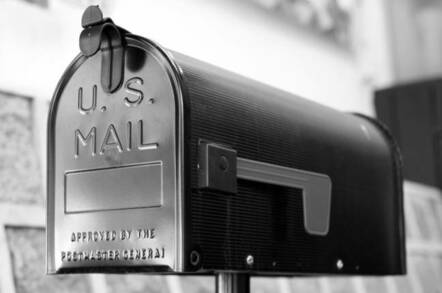 A man is facing charges of theft and fraud after the mail of parcel delivery service UPS was redirected to his home address.

Dushaun Henderson-Spruce, who lives in a one-bedroom garden apartment in Chicago, allegedly began the scheme back in October and wasn't rumbled until January this year.

According to The Chicago Tribune, Henderson-Spruce submitted a change-of-address form that requested mail addressed to UPS' global HQ, at 5 Glenlake Parkway NE in Atlanta, be sent to 6750 N. Ashland Ave – his Chicago home.

The wheeze saw him amass so much post that the mailman is reported to have left a US Postal Service tub at Henderson-Spruce's front door.

Reports suggested the mail included private and confidential missives, along with five corporate credit cards issued to UPS execs and board members.

However, somewhat worryingly for UPS customers, the delivery giant initially failed to notice the vast amounts of missing post.

The Tribune reported that a UPS security coordinator only notified postal inspectors that the firm had not approved a change-of-address almost three months after the scam started.

Upon investigation, the postal service found more than 3,000 pieces of mail at the apartment, and Fifth Third Bank reportedly found more than 10 cheques addressed to UPS – worth over $58,000 – were deposited in a personal account of Henderson-Spruce.

According to the United States Postal Service website, when someone fills in a change-of-address form, the postal service will mail a letter validating the move to the original address – it's not clear what happened to that letter in this case.

The charges state that Henderson-Spruce at first put his own initials on the signature line of the form, according to the Tribune, but then scratched them out and put "UPS" instead.

Henderson-Spruce has previously suggested the address change happened by mistake, and that his identity may have been stolen. ®

Batteries suck, chargers suck, monitoring sucks: surely we can do better than this